If your organization uses multiple instances of Jira to handle the load of your users, we recommend that you consolidate those instances into a single Jira Data Center instance. This will provide you with the administrative features, interoperability, high availability, and performance every large organization needs from Jira.

However, we recognize that consolidation and migration might not be a viable option for some organizations. If you're one of them, then you may need to keep your instances federated – this means keeping them autonomous, yet connected and interoperable. This guide explains the range of features and practices to help keep your federated instances healthy.

Some of the apps (formerly known as add-ons) mentioned in this guide are not developed by Top Vendors, and some of the practices may not suit your organization's setup.

What leads to a federated environment

First of all, let's look at the circumstances that lead to a federated environment. When talking to our customers, we can identify four main reasons you may wish to run multiple instances of Jira:

Reasons to set up a federated environment

Delving into the intentional set up of dedicated instances, we can identify several reasons for doing so by summarizing the practices of our customers, partners and our own IT organization: 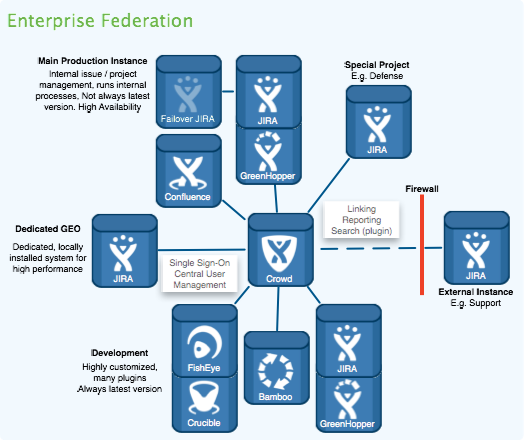 As an example of federation, let's share with you how Atlassian deploys dedicated instances for various purposes:

Federation of Jira instances is quite common among enterprise customers. Past research by Atlassian counted hundreds of customers that run three or more Jira servers concurrently within their organization. As a result, customers with federated environments are not alone, but part of a larger community. Atlassian has therefore developed and is continuing to implement features that make management and interoperability of federated Jira instances easier for customers.

The ability to have Atlassian products work together is one of the strongest features of Jira, Confluence, and the entire Atlassian stack. One of the best examples of this is the possibility to dynamically list Jira issues within a Confluence page. This same functionality also enables the integration of autonomous Jira instances. The Jira servers, thereby, do not need to run the exact same version as long as all versions contain the Application Links functionality. This makes interoperability in a heterogeneous landscape (e.g. see reasons to federate, "Access to new features") a lot easier.

In a nutshell, the goal of application links is to make inter-instance linking and integration of issues as easy as inter-project integration within the same instance! So after an application link between your Jira instances is set up, the integration functionality described below becomes available:

Activity streams not only show updates from the instance you are on but also from connected Jira or other Atlassian product instances (e.g. Confluence or Fisheye). For example, two companies working together on a project and linking up their Jira instances could be updated with new status changes of work at their partner's Jira through a unified activity stream.

Gadgets that draw their data from another linked and trusted Jira instance can be added to a Jira dashboard. This enables a unified reporting overview of all relevant instances. At Atlassian, for example, we utilize information radiators to show real-time reporting across our internal and external Jira instances. Next to the standard gadgets, you can also add additional gadgets. The applications are endless – from just one gadget that reports on a specific metrics of another project in another instance, to having one central instance in your federation that runs reporting of all projects in all Jira systems!

Linking issues is crucial to connecting relevant Jira issues. With remote links, you can not only track dependencies and other relations of issues to other local projects, but to remote projects in other instances as well. See our example about how we connect issues in JAC (Jira.Atlassian.com) with internal development tickets in our JDOG instance.

In many cases, you will have a project in an internal Jira instance for the development of a certain product and then a project in an external instance for the support of that product. With project links, you can make a connection between these two projects easier. For example, an activity stream in Jira1 that points to Jira2 will automatically show related updates of a connected project.

Atlassian Labs has developed the Jira to Jira Issue Copy, which allows users to copy an issue from one Jira instance to another. It is currently still in Atlassian Labs and available on the Atlassian Marketplace. It has a cleaner and easier to understand user interface, and supports more custom configurations and enhancements in the user matching algorithm. Note that this add-on is not supported by Atlassian, and although it may work for you now, we don't recommend building it into a process that you rely on due to it's Atlassian Labs status.

Although searching across multiple instances is not part of an out-of-the-box Jira installation, you can achieve it through ALM's Jira Client. This app is a desktop application that was designed to enable offline work with Jira. It lets you establish connections to an unlimited amount of Jira instances and once this connection has been established, search queries are executed automatically across all the various systems.

The following sections describe Jira features that you can use to efficiently administer a federated Jira instance:

Jira offers multiple ways to have a single-sourced user management, group definition and authentication (SSO) that multiple Jira instances or even other Atlassian products can draw from:

For an overview of different scenarios on how multiple Jira systems and/or other Atlassian products could interoperate and accomplish centralized user management, see illustrated Diagrams of Possible Configurations for User Management.

In a federated environment, multiple projects run on multiple instances of Jira. In certain circumstances, it might be desirable to change the federation landscape by altering the number of instances involved or moving projects between them. This can be done by merging and splitting instances as well as through project migration.

Test first! For all the procedures below, we highly recommend performing this procedure on a staging server first before production systems are touched.

Please note that a CSV import will only migrate the issue data itself. App data stored in active objects will not be carried over.

An XML export of a project doesn't export all app specific active objects (such as Agile ranking). See JRA-28748 (Project Imports should include GreenHopper data)

See Restoring a Project from Backup.

Although it is possible to run multiple Jira instances on the same server, dedicated hardware / VM is recommendable for enterprise use of Jira.

The more Jira instances a federated system has the more there is a need for central administration of these systems, we see clients achieving configuration management by implementing various methods:

The Jira Auditor add-on maintains an audit log on configuration changes in Jira. This is especially important when multiple administrators make changes to the same instance.

If you need to work in distributed environment WatchTower for Jira can help you to consolidate issues from remote Cloud and Server Jira instances into one single agile board. WatchTower gives you a single point of control to work with issues from remote instances on agile board in your Jira. Watchtower saves you time on context switching and gathering complete picture for several projects spread over federated environment.

Synchronization of projects across instances

In some scenarios,when Jira systems are integrated and deal with similar entities, it might be desirable to have actions in one system affect another. This is not an out-of-the-box feature but can be achieved through the use of apps and scripting:

Further customizations are also possible by creating Jelly Scripts that use the REST API of federated Jira systems. Also, a custom app could be developed to provide such functionality.

In order to avoid manual repetition of the upgrade instructions given in the Jira administration manual, there are ways to partially or fully automate the process:

For Jira instances with high availability requirements, it is also recommended to use a staging server setup for Jira. You do not require a separate license for a staging server.

As discussed in the Application Links section, Jira instances don't have to run the same version in order to enable application links.

Federating Jira instances will enable you to set different availability requirements for your instances. E.g. some Jira servers might run vital processes that require an uptime only achieved with failover mechanisms while others are not mission critical at all. You can certainly leverage the same tools for many instances such as the load balancer (given it runs in HA mode as well) for multiple Jira instances.

Please refer to the Failover for Jira Guide for more information.

Some of the operations described in this guide such as a customized synchronization between Jira systems require very sophisticated knowledge of scripting and system administration. We recommend collaborating with one of our Experts for such undertakings.

We can help connect you with a right Partner / Expert. If you're interested in a referral, please contact us.