Project releases are good to start with during the early stages of planning work for your teams. You can keep your releases as specific as you need them to be for their corresponding Jira projects. As your plan becomes bigger, and you add more projects to it, you may want to start considering creating cross-project releases.

Note that if you've set releases for your issues in Jira, these releases will also be displaying in your plan.

If there are no releases existing in your plan yet, you'll be prompted to start creating a release.

Sample plan, with no releases added to it yet

When saving a project release to Jira, the release becomes available for use in Jira as well.

To create a project release:

You need the Advanced Roadmaps user permission to save changes in Jira Software.

Cross-project releases are local to and are only used in Advanced Roadmaps. This means that these releases are not saved to Jira at all.

To create a cross-project release: 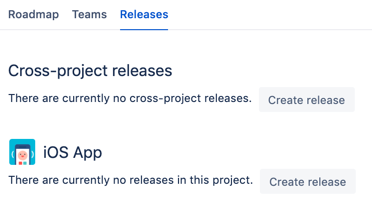