No matter how scary it may seem, branching your code is unavoidable - and also a very powerful way to let developers work in isolation on different aspects of your project.

The simplest branching model is that of a master branch and a development branch. The master (or mainline) branch contains the production versions for release. Parallel to master runs the development branch, where developers work on features that will be merged back into master. When sufficient new features have been developed, they will be merged back into master and form the next production release.

The simple model can be extended with other branches to make development work more flexible. These include:

But because a developer isn't constantly merging changes from master into their development branch, there may be uncertainty about whether the code will work when it is eventually merged back into master. The last thing you want is to pollute your master with non-functioning code from the branch.

Bamboo offers a number of useful tools for tackling branches. This best practice guide explores some of the ways that Bamboo handles branching to improve your development practices.

You may also want to refresh your Git knowledge with the Atlassian Git tutorials page before you read any further.

Understand what feature branching is, and how it can be useful as a development process. After completing this section, you will understand:

What is feature branching?

Feature branching is a lightweight way for a developer to make changes to a software project without having to worry about sharing those changes if they are uncompleted.

The main reasons to use feature branching are to ensure accurate conflict mitigation and to reduce the possibility of pushing code into the master branch or to other people until you are ready to do so. Utilizing rapid, regular code merges assists in reducing code drift across the development process.

So, what's wrong with this? The developer hasn't run their builds on the feature branch and it is unknown whether the tests pass or not and any defective code from the feature branch will reach the rest of the team when it's merged to master.

We can already see that the Bamboo plan branch helps us by running build plan tests against the newly merged code. Only if the tests are passed is the code pushed, which prevents incorporating defective code. If the build fails, the merge is thrown away and the developer is notified.

Feature branching offers a flexible and accurate conflict mitigation tool for developers. By using frequent and regular code merges, code drift and defective code implementation across the project is minimized. Feature branching works particularly well when developers have permission to toggle auto merging on and off to suit their individual development cycle. And of course, Bamboo provides an ideal environment to give developers access to these permissions.

Identify and describe how Bamboo can use feature and plan branches. After completing this section, you will understand:

Feature (or topic) branches are used to develop new features for an upcoming or future release. A feature branch exists only as long as the feature is being developed, and will eventually be merged back into the development branch.

Plan branches represent a branch in the version control system for development of a specific feature. The plan branch inherits all of the configuration defined by the parent plan, but may be built against any other specified plan. Any new branch created can be automatically built and tested using the same build configuration as that of the parent plan. Alternatively, you can override the parent plan and individually configure the branch plan. When the branch succeeds, it is merged back into master.

There are two ways in which plan branches can be merged with the master branch.

The gatekeeper method works in the following way: 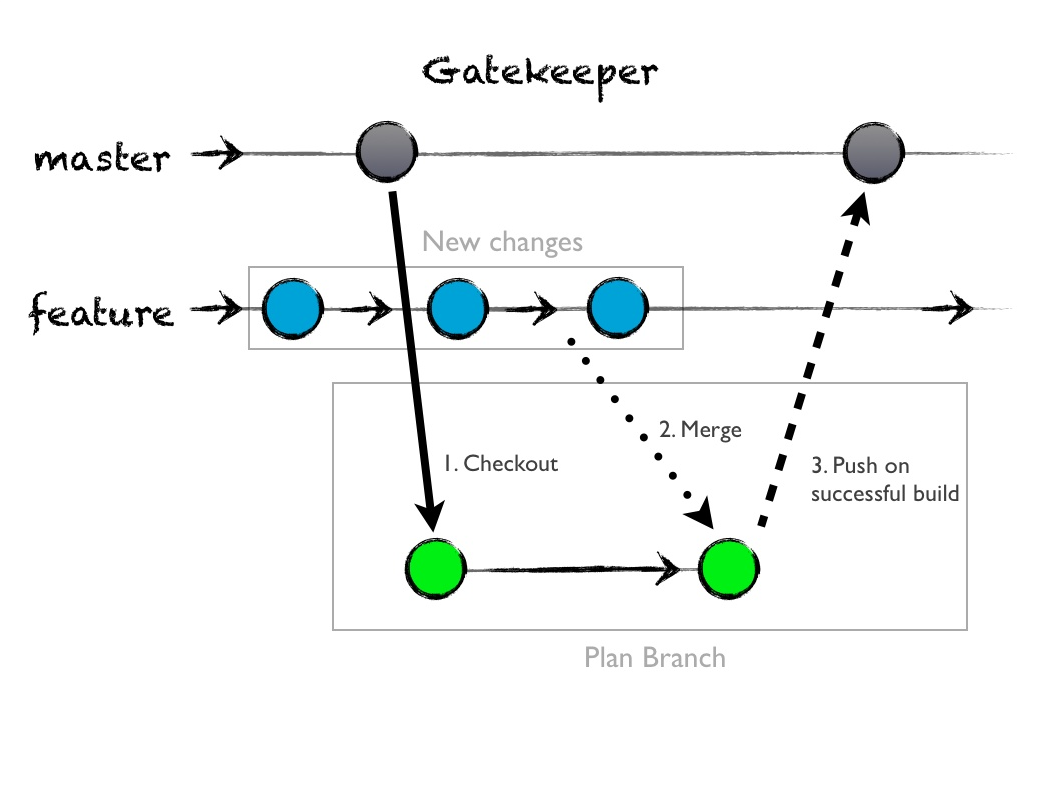 You should use the Gatekeeper strategy when you want to:

The build updater is an alternative approach where changes flow in the opposite direction. It works in the following way:

You should use the Build Updater strategy when you want to:

Now we know how plan branching works, but how do we implement it using Bamboo? Bamboo actually makes it very easy for us. Let's have a look at another example:

This is a typical high level DVCS plan branching scenario:

Step 1: Create branch - Use your version control system's branching feature to create a new branch in your repository.

Step 2: Branch detection - Bamboo will auto detect the new branch for Git, Mercurial, and SVN. Perforce and CVS users will have to manually create the branch on Bamboo's behalf. This can be done from the Branches tab in your build plan's configuration screen.

Step 3: Plan cloning - Bamboo automatically clones all plans associated with the repository and connects the clones to the new branch.

Step 4: Configure plan variables - The configuration of plans pointing to the master branch will be inherited by the plan branches. Jobs, stages, and artifact sharing work exactly as defined in the original plan. Variables, notifications, and triggers may be customized for each plan branch. Other configuration options for plan branches include:

Step 5: Branch build - The feature branch is built in accordance with its triggers. The optional merge strategies are applied at build time.

Feature and plan branching offers a range of flexible methods for developers to branch and work on different code segments during the development process. The Gatekeeper and Branch Updater methods allow alternative approaches to branching your code, while plan branching in DVCS allows Bamboo to automatically detect new branches in Git, Mercurial, and SVN repositories.

Understand how Jira integration can be used to track development changes branching, and how it improves oversight of a development project. After completing this section, you will understand:

Jira integration in plan branches relies on including a Jira issue key as part of the branch name. Bamboo and Jira work together to ensure that Jira issues are attached to development branches, allowing developers and other interested parties to examine which issue has informed the code development within the branch.

Why use Jira integration?

By including a related Jira issue as part of the branch name, Bamboo can link the issues to the related builds and to the branch itself. This makes oversight of individual stories much easier:

The Jira Bamboo plugin provides enhanced information sharing between Jira and Bamboo, allowing you to view the status of all builds and branches associated with an issue from within the issue itself. Apart from DVCS and branching, the plugin also surfaces deployment information for issues when Bamboo's deployment projects are used. 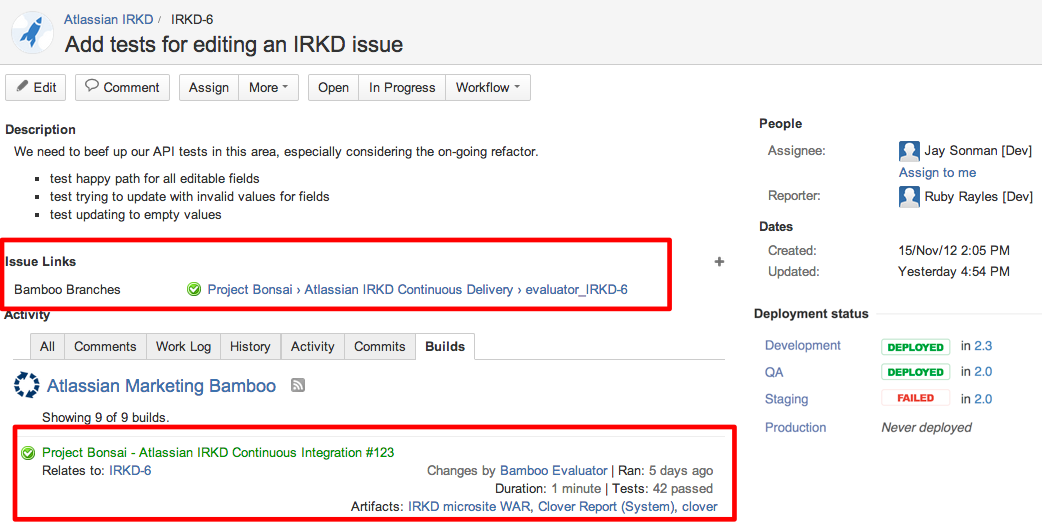