How to track when features are implemented

We're continuously improving and updating our Cloud products. To see the latest changes, take a look at the Atlassian Cloud release notes blog.

When a new feature or improvement is scheduled, we'll update the fix version on the relevant Jira issue to indicate the earliest product version that will include the change. This update often happens close to the product release date. While we have roadmaps for future releases, we don't make these public.

For a summary of changes, see the release notes for your product:

How we choose what to implement

When we plan a release, we use many factors to help decide which suggestions to implement, including:

We use the Suggestion issue type for improvements and feature requests.

We have standardized our workflow statuses across products to make it easy for you to see where an issue is at. Here’s the current workflow, and a description of each status: 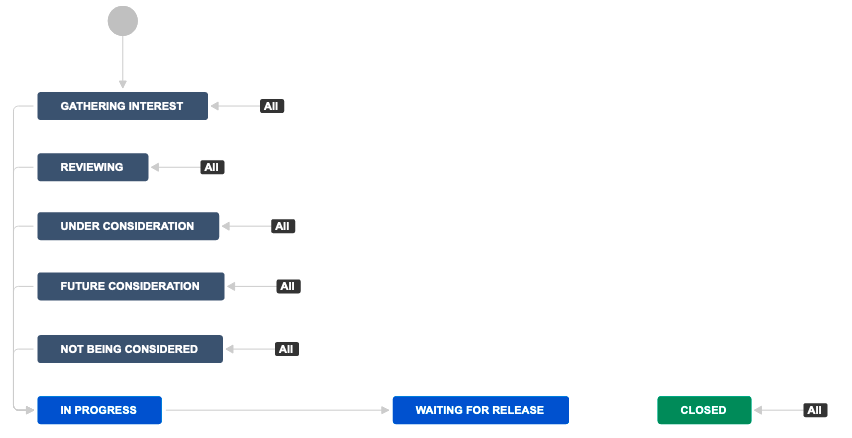 For a product manager's perspective on this workflow, see An updated workflow for Server feature suggestions on Atlassian Community.

How to get new features and improvements

To get access to new features and improvements for Server and Data Center products, you will need to upgrade to a release that contains the change.

In addition to the three main release types, a feature release can also be designated a Long Term Support release (formerly known as an Enterprise release), which means it will receive bug fixes for a longer period of time than a standard feature release.

Long Term Support releases (formerly known as Enterprise releases) are for Server and Data Center customers who prefer to allow more time to prepare for upgrades to new feature versions, but still need to receive critical bug fixes. If you only upgrade to a new feature version about once a year, a Long Term Support release may be a good fit for your organisation. For Jira Software and Confluence we will:

Not all bug fixes will be backported. We'll target the bugs and regressions that we deem most critical, focusing on stability, data integrity, or performance issues. There may also be some fixes that we choose not to backport due to risk, complexity or because the fix requires changes to an API, code used by third party apps (also known as add-ons), or infrastructure that we would usually reserve for a platform release.

In the example below, version 4.2 has been designated a Long Term Support release. The number of bug fix releases and timing illustrated below is just an example, your product's release cadence may differ.