Configuring Caching for an LDAP Directory

Crowd manages a cache of LDAP directory information stored in the Crowd database, to ensure fast recurrent access to user and group data. We call this 'database-backed LDAP caching'.

This page describes the caching of user and group information in the Crowd database. For a description of the other types of caching offered by Crowd, please refer to Overview of Caching.

Passwords are not cached

The Crowd cache does not store user passwords. All authentication is performed by calls to the LDAP directory itself.

Features of LDAP Caching in Crowd

For all LDAP directories with caching enabled, Crowd will keep an up-to-date cache of user and group information retrieved from the LDAP directory. Use of the cache should improve performance particularly in directories which are slow or off site.

Please refer to the notes below, especially regarding the number of users for which the caching is optimized.

Summary of the caching functionality:

The diagram below gives a conceptual overview of the caches supported by Crowd, including the LDAP database-backed caching discussed on this page. For a description of the other types of caching offered by Crowd, please refer to the overview of caching. 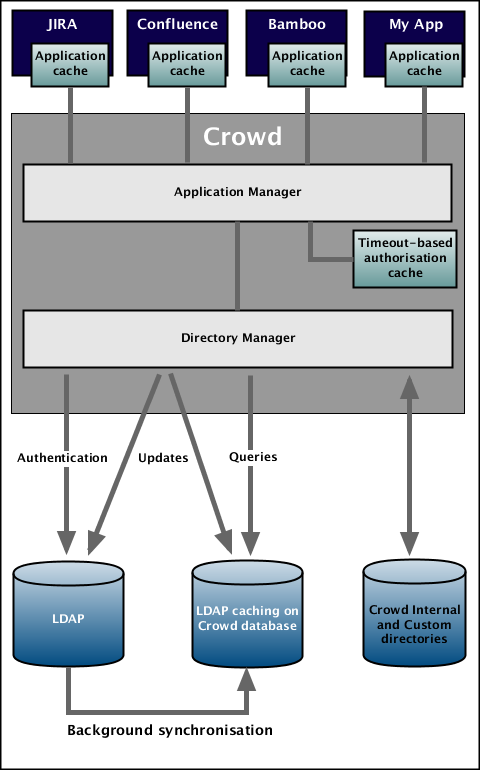 Crowd's database-backed caching is available for all the LDAP directories that Crowd supports. See Configuring an LDAP Directory Connector for the list of supported directories. 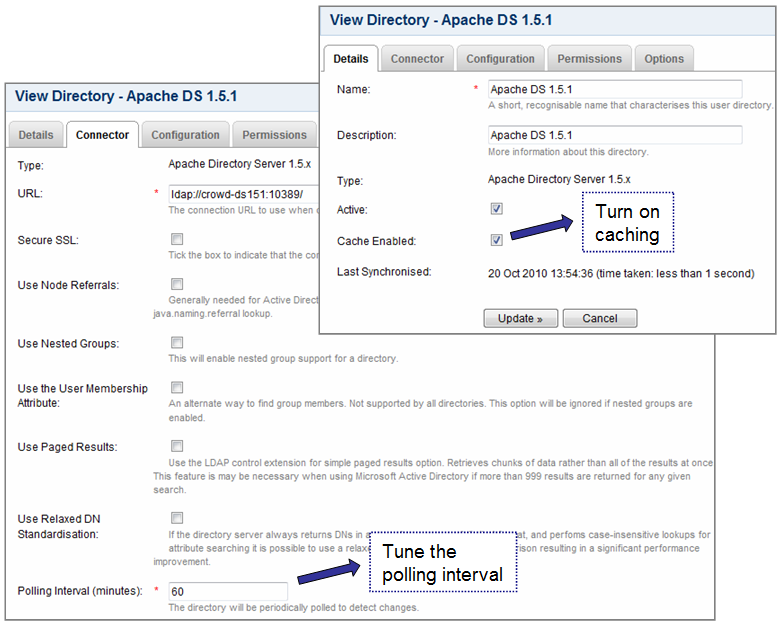 These are the configuration options, as shown in the screenshots above:

Finding the Time Taken to Synchronize 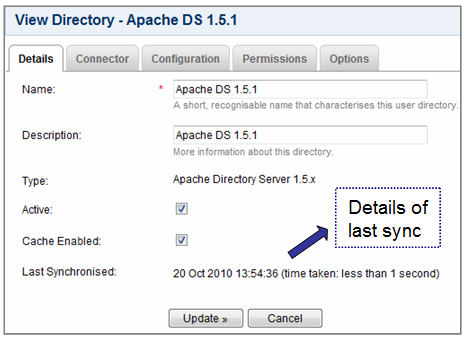 The directory connector's 'Details' tab shows information about the last sync operation, including the length of time it took. 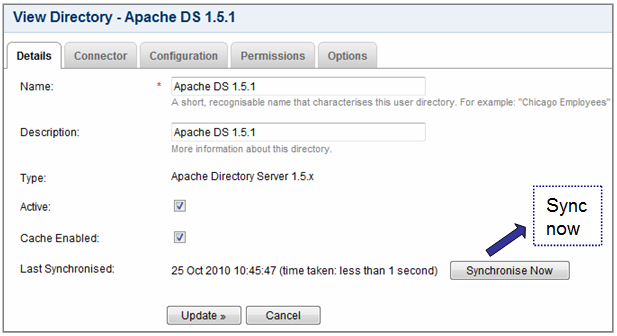 You can manually synchronize the cache by clicking the 'Synchronize Now' button on the the directory connector's 'Details' tab. If a sync operation is already in progress, you cannot start another until the first has finished.

When Crowd synchronizes with Active Directory, Crowd requests only the changes from the LDAP server rather than the entire user base. This optimizes the synchronization process and gives much faster performance on the second and subsequent requests.

On the other hand, this synchronization method results in a few limitations:

We performed internal testing of synchronization with an AD server on our local network consisting of 10 000 users, 1000 groups and 200 000 memberships.

We found that the initial synchronization took about 5 minutes. Subsequent synchronizations with 100 modifications on the AD server took a couple of seconds to complete.

Please keep in mind that a number of factors come into play when trying to tune the performance of the synchronization process, including: