This page describes how Crowd determines group memberships for an integrated application that is mapped to multiple directories, where duplicate user names and group names are used across those directories.

This is the 'masking' case – Crowd sees the directories mapped to an application from the top down, and will determine the effective group memberships based on the first instance of a user that is detected, working from the highest priority directory down to the lowest. Occurrences of the user in a lower priority directory are 'masked', and are not effective.

Note that the priority order of the mapped directories is essential to this scheme. See Specifying the Directory Order for an Application.

In the diagram of non-aggregating membership below, users or groups in a directory 'mask' themselves in lower priority directories. 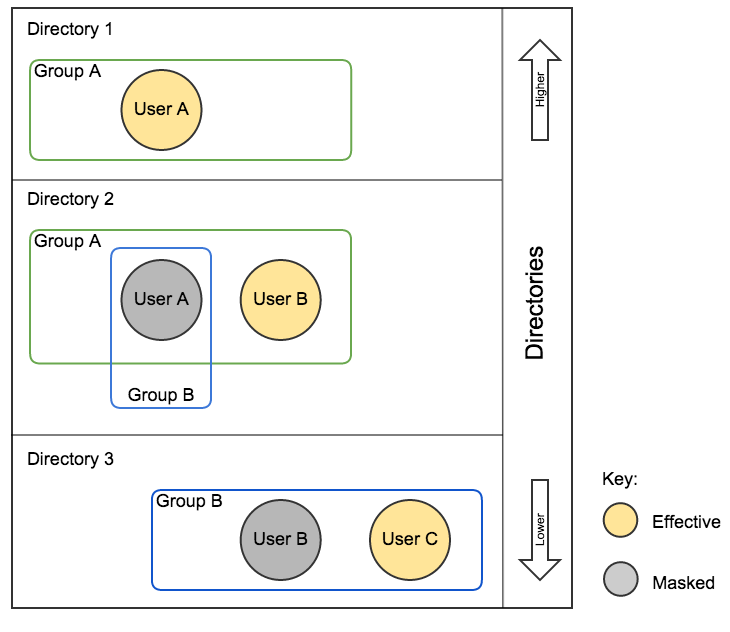 A user effectively belongs to only those groups where the user is a group member in the highest directory that contains the user.

A group's members are all the 'top-most' users that belong to the group. If a group contains the user in a 'lower' directory, that membership is 'masked out' and is not effective.

This is the 'blending' case - Crowd sees across all the directories mapped to an application, and will determine the effective group memberships based on a union of the directories.

In the diagram of aggregating membership  below, effective membership is a blend of the memberships in all mapped directories. 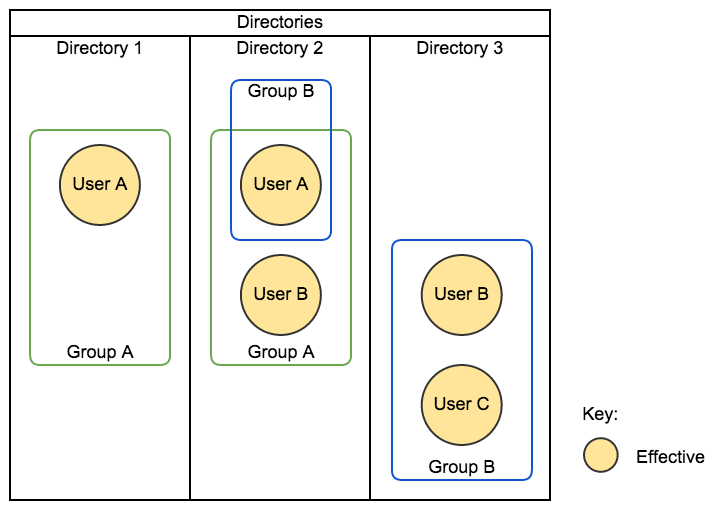 A user effectively belongs to all the groups of which the user is a member, in any directory.

A group effectively contains all the users that belong to that group in any directory.

Configure the aggregation scheme for an application

When you map multiple directories to an integrated application in Crowd, non-aggregating membership is applied by default.

You can change the aggregation scheme for each integrated application by checking, or clearing, the Aggregate group memberships... checkbox on the Directories tab for the application:

The aggregation scheme applies across all the directories mapped to the application.

When a user is added to a group, they are only added to the first writeable directory available, in priority order. This applies for both the aggregating and non-aggregating membership schemes.

When a user is removed from a group, the behavior depends on the membership scheme:

The membership schemes described above are not used when Crowd determines if a user should be able to authenticate.

Crowd only checks if the user is active in the first (highest priority) directory in which they are found when determining authentication.

For example, an application in Crowd is mapped to two directories: Crowd Internal Directory (primary) and an AD Delegated Authentication Directory (secondary).

Result: Crowd rejects access (authentication), because user A is first found in the primary directory, and the user is inactive there.