BuildBug is a Bamboo plugin to create JIRA issues when a build breaks.

Why is this Useful?

I see two main reasons to use this plugin. Firstly, the created JIRA issue provides immediate visibility to the build problem. You can assign the issue to a specific developer once the cause of the failure is known so everyone can see that someone has taken ownership of the problem.

The second reason is less apparent but potentially more beneficial. A build failure is usually associated with some form of waste:

You can use the created JIRA issue (potentially in combination with work logs, custom issue types, work flows, resolutions etc) to record the following information for each build failure:

Then you can use JIRA's search/reporting features to identify trends from your build failures, which will hopefully allow you to find and eliminate recurring problems.

For example, you may find a lot of builds failing due to infrastructure issues - this would allow you to better quantify the impact of these problems.

When a Build Breaks, a JIRA Issue is Created.

When a build breaks, a new issue is created. The project, assignee, issue type and priority are configurable.

The following information is included in the issue: 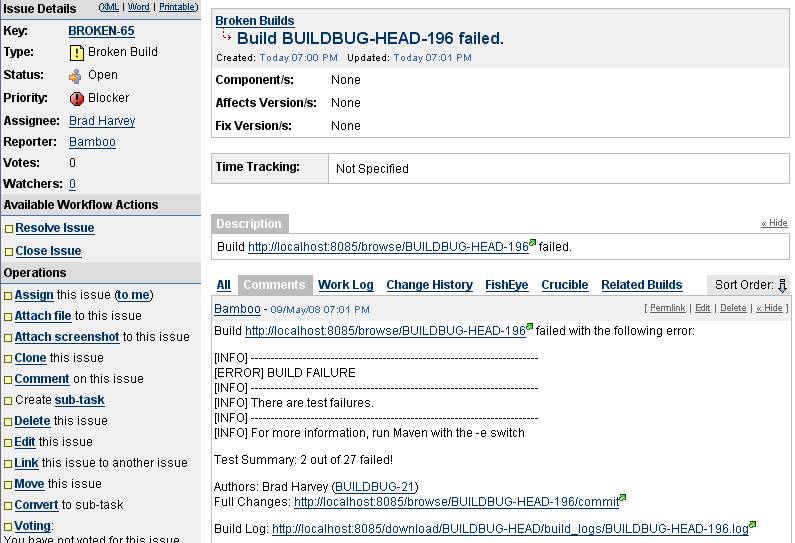 The JIRA issue will show the current state of play because BuildBug adds a comment describing the last build result each time a new build completes, until the build is fixed.

Navigate Between Bamboo and JIRA

It's easy to jump back and forth between the JIRA issue and Bamboo build results.

The BuildBug plugin relies on Bamboo JIRA Integration. Please ensure your JIRA integration is working before attempting to install this plugin. One difference is that the JIRA user you supply must have permission to create JIRA issues in the projects you select for each build plan.

Install BuildBug as per Installing a Plugin.

Enable BuildBug for a Build Plan

To enable BuildBug, go to the "Post Actions" tab in the configuration for a build plan and scroll down until you see the BuildBug section.

Select the checkbox to enable BuildBug for this build plan.

You must select a project, assignee, issue type and priority for the JIRA issue that will be created. The values for the dropdowns come directly from JIRA. Assignee will be validated when you hit save. 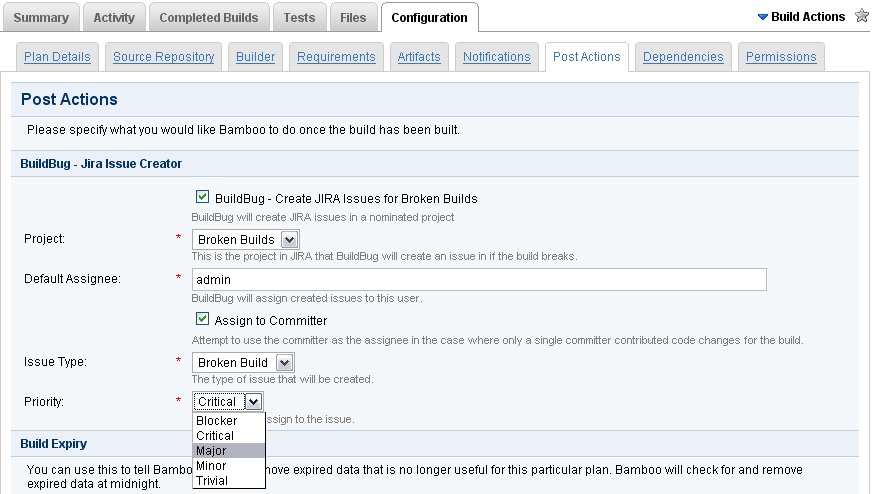 There's also an option to use the author from the commit details as the assignee. This will only kick in when a single author is responsible for all the commits contributing to the build. When this is not the case (no commits, or multiple authors) or when the author is not a user in JIRA then the assignee field will still be used.

That's it! Now you get to break the build to test it out.

Something that could be useful is changing the state of the JIRA issue. For example, it could be resolved when the build is fixed. I'm not sure how complicated custom workflows will make doing this, so I'll hold off on this one unless people ask for it.