Changes in the improved interface

This page has been written with the assumption that you've already migrated from live plans (version from 2.0 to 2.27) to plans with the improved interface (version 3.0 and later).

Here are the important changes to note when planning work in the improved interface.

You can configure your plan settings to suit how your team works. See Configuring plans for more details.

The following settings from live plans are also used as default:

Viewing issues in a plan

Previously, issues were displayed in a timeline at the top of the plan, with the work items of your teams displayed in a scope table at the bottom, as shown in the sample plan below.

In the improved interface, you still have the scope table in fairly the same position in the plan, but we now call this the scope section. 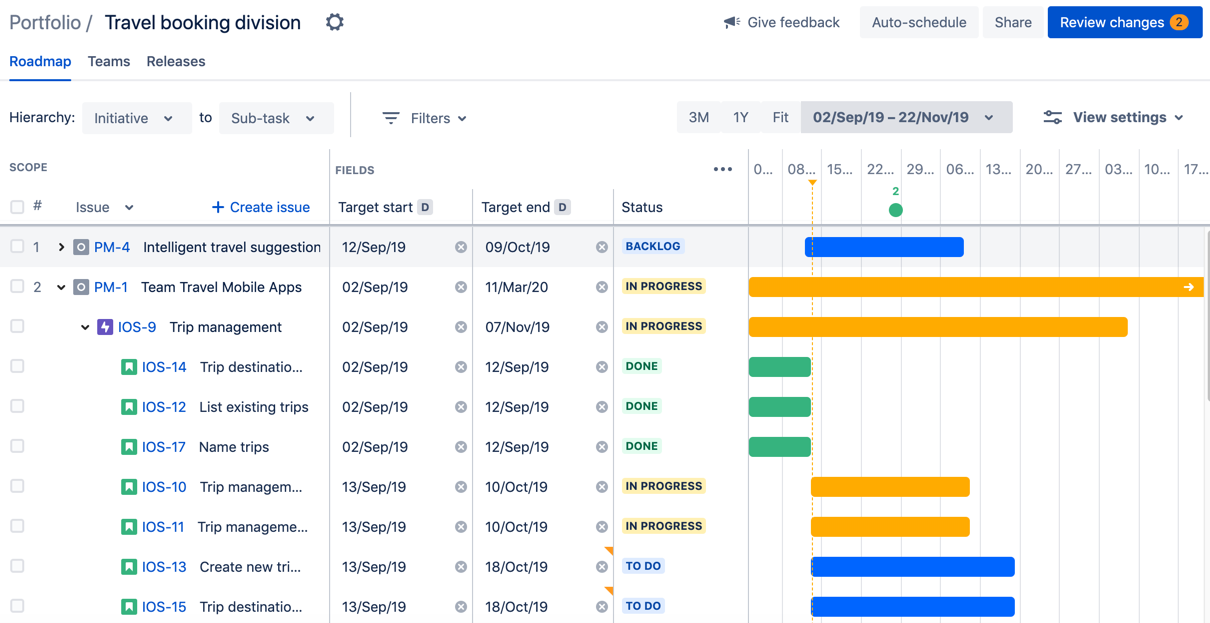 Visualizing work in a plan

Previously, using the themes report, you could apply a monochromatic, single-level view of your plan, to distinguish different work streams (projects, teams, and more) into separate swimlanes.

In the improved interface, you can now mix and match grouping and coloring options, which let you visually display more details to your audience. This also makes it easier for your audience to consume your plan in greater detail.

Sample plan, with issues grouped by project, and issues colored by status

Viewing dependencies in the timeline

Previously, you would know if an issue has a dependency if the issue has a light blue bar in either end in the timeline.

Sample plan with issue that have dependencies

In the improved interface, you can view the dependencies of an issue from the dependency columns in the fields section. You can also click the number of dependencies at either end of a schedule bar accordingly. See Managing dependencies for more information.

Sample plan, with issues having dependencies

Here's how you can create issues in the improved interface:

In the improved interface, we're simplifying this task by letting you set the assignee directly in your plan. This effectively removes that extra step of assigning the issue to a team member first, then saving the change in Jira as an assignee change. One thing to note though — you can now assign an issue to only one assignee, where you could assign it to multiple users previously.

By default, target start and target end dates are used when scheduling and auto-scheduling issues in a plan. You can choose to use due dates and other custom dates (date picker type) to schedule issues, which helps you align your plan with how your teams work.

You can also directly interact with the timeline itself to schedule issues. You can manually drag and drop issues in the timeline, according to how you want to schedule these issues.

You can also choose to auto-schedule the issues in your plan. You can preview the suggested schedule, and then decide whether or not you'll accept the auto-scheduled changes.

This can be confusing, especially if your teams have already ranked issues in their backlogs or active sprints, and the child issues are suddenly ranked higher.

It's important to note that the change in ranking behavior can produce different scheduling results between live plans (any version from 2.0 to 2.27) and plans with the improved interface (version 3.0 and later). For example, even if issues are placed in the same order across both types of plans, the resulting scheduling results between these types of plans will be different.

Progress is calculated by the percentage of estimates completed against the total estimates, and is visually displayed in a plan. You'll see a status breakdown bar, which displays issues grouped by status category:

You can review and select which changes to save in Jira. See Saving changes in Jira for more details.

Zooming in and out of work in your timeline

You can quickly see issues for a set duration, like 3 months, 1 year, or a custom date range. This lets you focus on only the issues scheduled within the selected timeframe.

You could also do this in live plans; however, you'd need to use the scheduled range filter — and this method wasn't too obvious to use.

Previously, you'd manage your teams by clicking the teams tab, at the top-right area of your plan.

In the improved interface, team management is accessed via the teams view above the scope table. You can also filter issues by a specific team, to quickly view all the issues assigned to the team.

Previously, you'd be able to plan the individual capacity of your team members.

Previously, you'd manage releases by clicking the releases tab, at the top-right section of your plan.

In the improved interface, release management is accessed via the releases view above the scope table. You can also filter issues by a specific release, to quickly view all the issues in that release.

Previously, you could share details about your plan using different report types, like the capacity report and dependencies report, via the reports view.

In the improved interface, we've removed the reports view because we're currently building more working views that can be shared as reports to relevant audiences. Although the reporting functionality is currently limited, you can still share a read-only version of your roadmap.