While scheduling work for your teams, Portfolio for Jira will warn you if there are any misaligned dates in your plan.

If you set dates for issues that conflict with the dates of their corresponding parent or child issues, you'll explicitly get a warning message for it. This makes it easy for you to quickly fix any dates that may have been mistakenly updated.

Sample warning when a child issue starts before its parent

This also applies when issues use sprint dates in the plan.

Issue dates clashing with due dates

If you've set dates for an issue that clash with the due dates coming from Jira, you'll need to modify these dates accordingly.

Adding issues to or removing issues from active sprints

If you're adding an issue to or removing an issue from an active sprint, note that this will affect the scope of the sprint in progress. In the 'Review changes' dialog, a warning will be shown for such changes on hover.

Sample warning when an issue is added to an active sprint

Current date is past the end date of an issue

If the current date at the time you're viewing an issue is already past the end date of that issue, you'll explicitly get a warning message for it. You'll also be prompted to update either the status of the issue, or its end date. 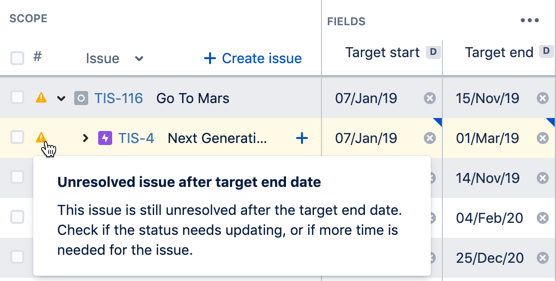 Additionally, if the unresolved issue is in progress, you'll be prompted to do one of the following:

If you're using sprint dates as issue dates, these dates will be used when monitoring releases and issue dependencies.

If the sprint end date of an issue is past the assigned release date, the release will become off track.

Off track release due to sprint dates being past release date

The sprint dates will be used to monitor the relationship of issue dependencies.

In the example below, IOS-12 is blocked by IOS-15, which means work for IOS-15 must be completed so work for IOS-12 can start. However, IOS-15 is in a sprint that starts later than the sprint where IOS-12 is assigned to. The dependency badges will become red, to clearly indicate that the dates of the dependent issues are clashing.