A builder plugin that will allow configuration and execution of build files for .Net/Mono projects,
using NAnt, Msbuild and devenv and also supports the parsing and displaying of NUnit, MBUnit and MSTest test results
.

This plugin will allow you to configure a single Bamboo instance handle building both your Java and .Net projects, which is especially useful if you have multi-discipline teams in your organization.

If you're upgrading to Bamboo 2.1 or 2.2, then you will also need to upgrade the NAnt Builder plugin to the latest version.

This plugin has been tested using .Net Framework v2.0 on Windows XP and Mono v1.2 on OS X using both Bamboo v1.2.x and v2.0.x If you encounter any difficulties with this builder on other platforms, please let me know and I'll endeavor to resolve the issue.

Make sure that any older versions of the plugin are removed first!

A devenv.com builder as well, which works in the same sort of way as the NAnt Builder and includes the support for parsing and recording NUnit test results. The devenv.com executable is included as part of Microsoft Visual Studio and allows you to build a Visual Studio Solution from the command line.

You first need to add the Builder via the Administration page 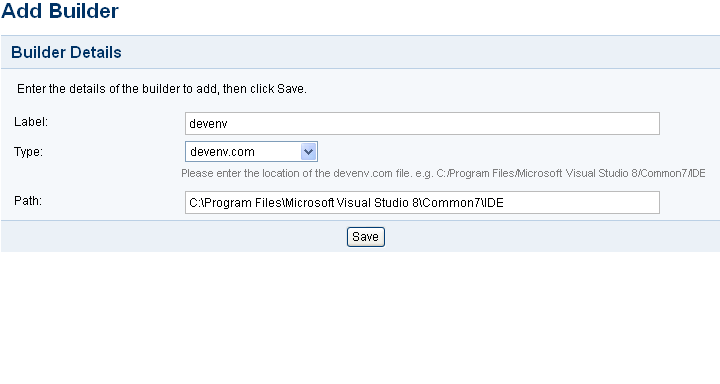 Once the builder has been added, you can use this builder in your build's Configuration.

Similar to the devenv builder, support for Msbuild has also been included.

Generic .NET Script and Command builders are included also. These builders allow you to specify a custom command or script to be used as part of a build's execution, but which allow the parsing and displaying of NUnit/MBUnit test results.

If your build produces NCover coverage files, then enter the location of the coverage result files on the Builder Configuration tab. Bamboo will then parse and display the NCover results when each build runs.

The following lists the reported defects and enhancements that have been reported. If you encounter a defect, or if there is a feature that you'd like added to the builder, feel free to raise an issue at the Jira site, or drop me an email at piaross@gmail.com.