JIRA Service Desk provides powerful built-in SLA management so you can track how well your team adhere to the agreements you have with your customers. JIRA Service Desk comes with a few pre-configured SLA metrics to cover some of the most common IT requirements; however you can modify them or create custom SLA metrics to reflect the SLAs you use in your business.

The SLA tools in JIRA Service Desk are extremely flexible; review this page for an introduction to how you can set up your service desk to track your team's unique SLA metrics:

Tip: JIRA Service Desk provides robust reporting tools that you can use to track your team's performance against your SLAs. Check out this page for tips on tracking your SLAs

For information about the permissions needed to see and administer SLAs, see How JIRA and JIRA Service Desk Work Together.

A look at how an SLA is constructed

An SLA is made up of two settings: time measurement and goals for issues. Together, these criteria make up an SLA.

You can't change the name of an SLA after you've saved it, so make sure that the name you choose will support the SLA metric and any additional things you might need to measure in the future.

Setting up the SLA time metric

You can think of the time metric as a stopwatch that tracks time between two points in an issue's life-cycle. JIRA Service Desk lets you control exactly when time is tracked, letting you start, stop, and pause the counting based on the status of an issue or when the issue changes (for example, a comment is added). For example:

Here's a look at how you use JIRA Service Desk SLA designer to set the conditions for the time metrics:

Notice that you can set multiple conditions for the start, stop, and pause time. Check out Example: Creating an SLA that doesn't track continuous time for an in-depth look at how you can use this functionality.

Set up the SLA goals

While the time conditions on an SLA specify what your team considers to be "trackable" time for the SLA, the goal section of the SLA designer lets you set the amount of time that's allowed for different scenarios. SLA goals can be in whole hours or in time increments less than an hour. For example:

Here's a look at how you use the JIRA Service Desk SLA designer to set the goals for various issues:

By default, SLAs are measured against 24/7 working days. However, you can use SLA calendars to specify the working hours during which time should count against the SLA target. For example, SLA calendars let you exclude holidays or weekends from the time that affects the SLA metrics.

Use the Calendar button on the SLA tab to create the calendars that work for your environment. Then associate them with SLAs as needed. See Example: Creating a basic SLA for an example of setting up an SLA that uses a 9-5 working day SLA calendar.

SLA calendars are unique to each service desk. If you want to use the same calendars in multiple service desks, you must re-create them in that project.

The best way to understand SLAs is to look at the out-of-the box SLAs JIRA Service Desk provides, or practice making your own. Check out these detailed examples of SLAs to get an idea of the different ways you can use SLAs in your team:
Example: Creating a basic SLA
Example: Creating an SLA that doesn't track continuous time
Example: creating an SLA with multiple cycles

How your team sees SLAs

Your team members can see a read-only version of the SLA tab so they can view how the SLA is configured. In the detail view of issues, the SLA section lists even more detail about the SLA(s) that the issue is being measured against. 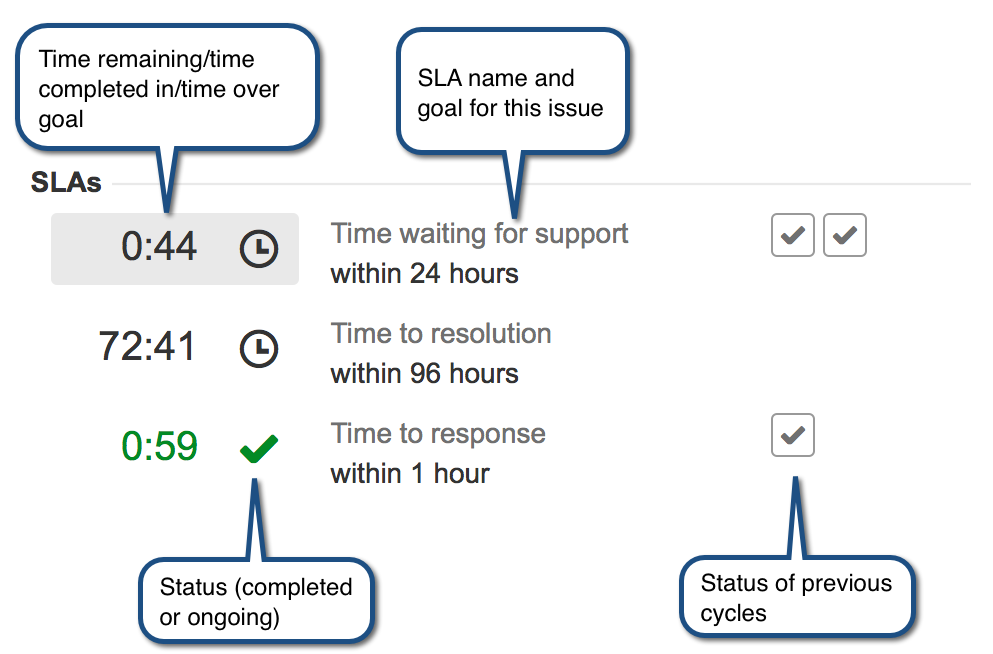 Review the following sections for more detail on what the SLA tracker conventions indicate.

The SLA tracker uses colors to indicate the urgency of a given SLA for an issue based on the time remaining.

The time count may be configured to pause on certain conditions. A paused SLA will display a paused icon:

If the issue meets the criteria for multiple SLAs, trackers for each SLA will appear. In addition, if the SLA has had multiple cycles, you can hover over the symbols for more details on how the SLA was met for that particular cycle. (For example, in an SLA that is measured based on when an issue is waiting for support, you can see whether the SLA was met each time the issue started waiting for support.)

When you view a list of issues (in a queue or elsewhere), you can sort them by their SLA resolution times. Ongoing issues are listed first, with the shortest time remaining at the beginning of the list. Completed issues are ranked last but aren't sorted by the remaining time.