... describes how to set up a single Stash server in a highly available configuration.

... we highly recommend that you first read Using Stash in the enterprise.

For Active/Active HA with Stash...

If Stash is a critical part of your development workflow, maximizing application availability becomes an important consideration. There are many possible configurations for setting up a HA environment for Stash, depending on the infrastructure components and software (SAN, clustered databases, etc.) you have at your disposal. This guide provides a high-level overview and the background information you need to be able to set up a single Stash Server in a highly available configuration. The guide also describes one possible configuration in more detail.

Note that Atlassian's Bitbucket Data Center resources product uses a cluster of Stash nodes to provide Active/Active failover. It is the deployment option of choice for larger enterprises that require high availability and performance at scale. Read about Failover for Bitbucket Data Center.

Please note that your feedback and comments are welcome! We very much value additional lessons learned from your experience with alternative scenarios!

High availabilty describes a set of practices aimed at delivering a specific level of "availability" by eliminating and/or mitigating failure through redundancy. Failure can result from unscheduled down-time due to network errors, hardware failures or application failures, but can also result from failed application upgrades. Setting up a highly available system involves:

Understanding the availability requirements for Stash

Before implementing failover solutions for your Stash instance consider evaluating and leveraging automatic correction measures. These can be implemented through a monitoring service that watches your application and performs scripts to start, stop, kill or restart services.

The cold standby (also called Active/Passive) configuration consists of two identical Stash servers, where only one server is ever running at a time. The Stash home directory on each of the servers is either a shared (and preferably highly available) network file system or is replicated from the active to the standby Stash server. When a system failure is detected, Stash is restarted on the active server. If the system failure persists, a failover mechanism is started that shuts down Stash on the active server and starts Stash on the standby server, which is promoted to 'active'. At this time, all requests should be routed to the newly active server.

For each component in the chain of high availability measures, there are various implementation alternatives. Although Atlassian does not recommend any particular technology or product, this guide gives examples and options for each step. In the following, each component in the system is described and an example configuration is used to illustrate the descriptions.

This section describes one possible configuration for how to set up a single instance of Stash for high availability. 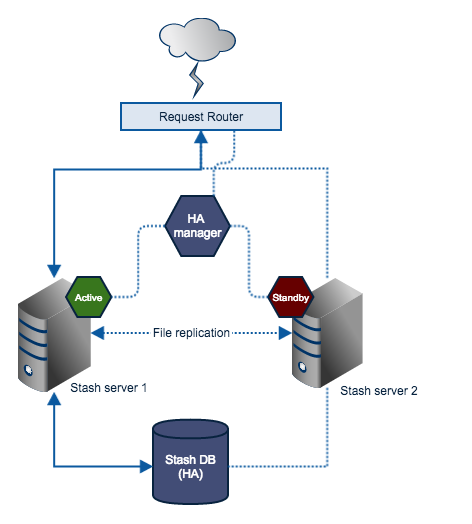 This particular implementation is provided to illustrate the concepts, but hasn't been tested in production. We strongly recommend that you devise a solution that best fits your organisation's existing best practices and standards and is thoroughly tested for production readiness.

All high availability solutions are based on redundancy, monitoring and failover. In the cold standby approach, only one server is running Stash at a time. It is the request router's responsibility to route all incoming requests to the node that is currently the primary node. For full high availability, the request router should be highly available itself, meaning that the component is monitored by the HA manager and can be failed over to a redundant copy in the network.

Stash stores its data in two places: the Stash home directory and the database that you have configured. The Stash home directory contains, among other things, the Git repositories being managed by Stash (with some additional Stash-specific files and directories), installed plugins, caches and log files. The database contains, among other things, your project and repository information and metadata, pull requests data and the data for your installed plugins.

Data in Stash's home directory and in the database are very tightly coupled. For instance, repository pull requests have their metadata, participants and comments stored in the database but certain Git-oriented information around merging and conflicts (which are used to display the diffs in the user interface) are stored in the managed Git repositories. If the two were to fall out of sync you might see an incorrect pull request diff, you might be left unable to merge the pull request, or Stash may simply refuse to display the pull request at all. Similarly, Stash plugins are installed from jar files in the Stash home directory but their state is stored in the database. If the two were to fall out of sync then plugins may malfunction or not appear installed at all, thus degrading your Stash experience.

When designing a high availability solution for Stash based on a replicated file system and database, it's important that the file system replication is atomic. The replicated file system must be a consistent snapshot of the 'active' filesystem. This is important because changes to a Git repository happen in predictable ways: first the objects (files, trees and commits) are written to disk, followed by updates of the refs (branches and tags). Some synchronisation tools such as rsync perform file-by-file syncing, which can result in an inconsistent Git repository if the repository is modified while the sync is happening (for example, if object files have not been synced, but the updated refs have been).

Furthermore, the tight coupling between the Stash home directory and database makes it essential that the Stash home directory and database are always consistent and in sync (see here for more information). By extension, this means that any high availability solution based on a replicated file system and database needs to ensure that the replicated file system and database are in sync. For example, if the replication is based on hourly synchronisation to a standby node, care must be taken to ensure that the synchronisation of the database and filesystem happen at the same time.

The example HA implementation uses a DRBD managed block device for its Stash home directory. By default, DRBD runs in a Primary/Secondary configuration in which only a single node can mount the DRBD managed volume at a time. In this configuration, DRBD should be managed by Pacemaker to ensure that the DRBD volume is co-located with the Stash resource.

In preparation for experimentation with an Active/Active configuration, the example HA implementation has configured DRBD in a dual-primary configuration, which allows both nodes to mount the DRBD managed volume at the same time.

To allow for monitoring in a high availability environment, Stash, since version 2.10, has supported a REST-based health check endpoint at /status that describes the current health of the instance. This endpoint supports only the GET verb and requires no authentication, XSRF protection header values, or mime-type headers. The /status endpoint has been designed to return sane output even when Stash is currently unavailable as a result of database migration or backup. Please note that other URLs such as /login or /rest/api/latest/application-properties will redirect to the maintenance page when Stash is performing database migration or backup. Using these endpoints may unintentionally trigger failover when these URLs are used for monitoring the health of the system.

The following is a list of the responses the /status health check endpoint will return:

If a connection error occurs when trying to connect to the endpoint (but the server is reachable) then Tomcat has failed to start.

Stash's health check is simple and not resource intensive. You should feel free to check as often as is deemed necessary to maximise continuity of Stash in your organisation. We do recommend, however, to not check more frequently than every 15 seconds so that the HA resource manager / cluster does not mistake transitory slowdowns such as stop-the-world garbage collection in Stash's JVM. We recommend a monitor timeout of 30 seconds because the first check after startup can be fairly slow. After startup completes, the check should take only a few milliseconds.

The following table outlines how we recommend that your HA resource manager responds to failure events:

A split-brain condition results when a cluster of nodes encounters a network partition and multiple nodes believe the others are dead and proceed to take over the cluster resources. In the context of a Stash HA installation this would involve multiple Stash instances running concurrently and making filesystem and database changes, potentially causing the filesystem and database to fall out of sync. As previously noted this must not be permitted to happen. There are several ways to address this:

This involves configuring redundant and independent communications paths between nodes in the cluster. If you maximise the connectivity between nodes you minimise the likelihood of a network partition and a split brain. This is a preventative measure but it is still sometimes possible for the network to partition.

This involves ensuring that the first node that believes the others are dead 'fences off' access to the resource that other nodes (which appear dead but may still be alive) may try to access. The losing nodes are prevented from making modifications, therefore maintaining consistency. In a Stash HA, the resources that would need to be fenced are the database and the replicated file system.

This is a more aggressive tactic and again involves the first node that believes the others are dead, but instead of fencing off access to particular resources, it denies all resource access to them. This is most commonly achieved by power-cycling the losing nodes (aka "Shoot The Other Node In The Head" or STONITH). In a Stash HA, this would involve power-cycling the losing Stash servers.

The example implementation uses Pacemaker to manage failover. Pacemaker in turn uses the provided OCF script to properly shut down the failing Stash and start Stash on the secondary node.

Please note that the vagrant provisioning script in the example implementation contains a simplified configuration that is aimed at testing failover. It configures Stash to immediately failover to a secondary node, without attempting to restart the application. It also disables the STONITH feature for ease of testing. In a production system, at least one restart should be attempted before failing over and STONITH should be enabled to handle 'split brain' occurrences.

Except where otherwise noted, content in this space is licensed under a Creative Commons Attribution 2.5 Australia License.
{"serverDuration": 438, "requestCorrelationId": "00098f308da3da6e"}