This guide contains step-by-step instructions for setting up the component services for a small-scale instance of Hipchat Data Center using VMware hosts. This type of deployment uses one VMWare host for the Hipchat node, another VMWare host for all three data stores, and a reverse proxy.

Use this deployment configuration if:

A small-scale deployment can save you administrative and maintenance time and reduce infrastructure costs. However, it can also introduce some single points of failure which you should be aware of as an administrator. Because there is only one of each component in the cluster, there are no failover mechanisms, and a single node failure can make the entire Hipchat deployment unavailable. For example, if the node that hosts your data stores fails, all three data stores are affected and the deployment will immediately stop. Similarly, a problem on the reverse proxy will prevent users from accessing the service, and a failure on the Hipchat node itself will stop the service.

If you are deploying a small-scale instance in production, make sure that you have good monitoring set up to alert you if there are problems, make sure your configuration files are backed up, and take frequent backups of the data stores node.

Depending on your organization's needs, you might decide to plan for the future when deploying Hipchat Data Center.

In both the small- and Enterprise-scale deployment options, clients access the Hipchat node(s) through a service which terminates SSL. This is required regardless of which deployment type you choose.

In a small-scale deployment all client connections go to a single Hipchat node, so this service can be a reverse proxy. When you add nodes to create an Enterprise-scale deployment, the service must also function as a load-balancer which distributes client connections among the Hipchat nodes. If you think you might later increase your small-scale deployment to Enterprise-scale, you can choose one of several services (such as NGINX, HAProxy or Apache) that can function as both a load balancer and a reverse proxy.

Planning for apps, add-ons, and integrations

If your deployment will use apps, add-ons, or integrations which are hosted on the public internet, you must make sure that your cluster allows the Hipchat nodes to access them. You can set up a forward proxy (sometimes called an "outbound" proxy) to allow the Hipchat nodes to reach external apps, and configure your network so that the apps can reach your reverse proxy (or load balancer).

If you are unable to connect your cluster to the internet for security reasons, some open source add-ons allow you to download their source code, inspect it, and rebuild it to host it on your network as a private service.

If you are migrating from a Hipchat Server deployment you might need to increase the data store node's available storage based on the number and size of messages in your exported server data. 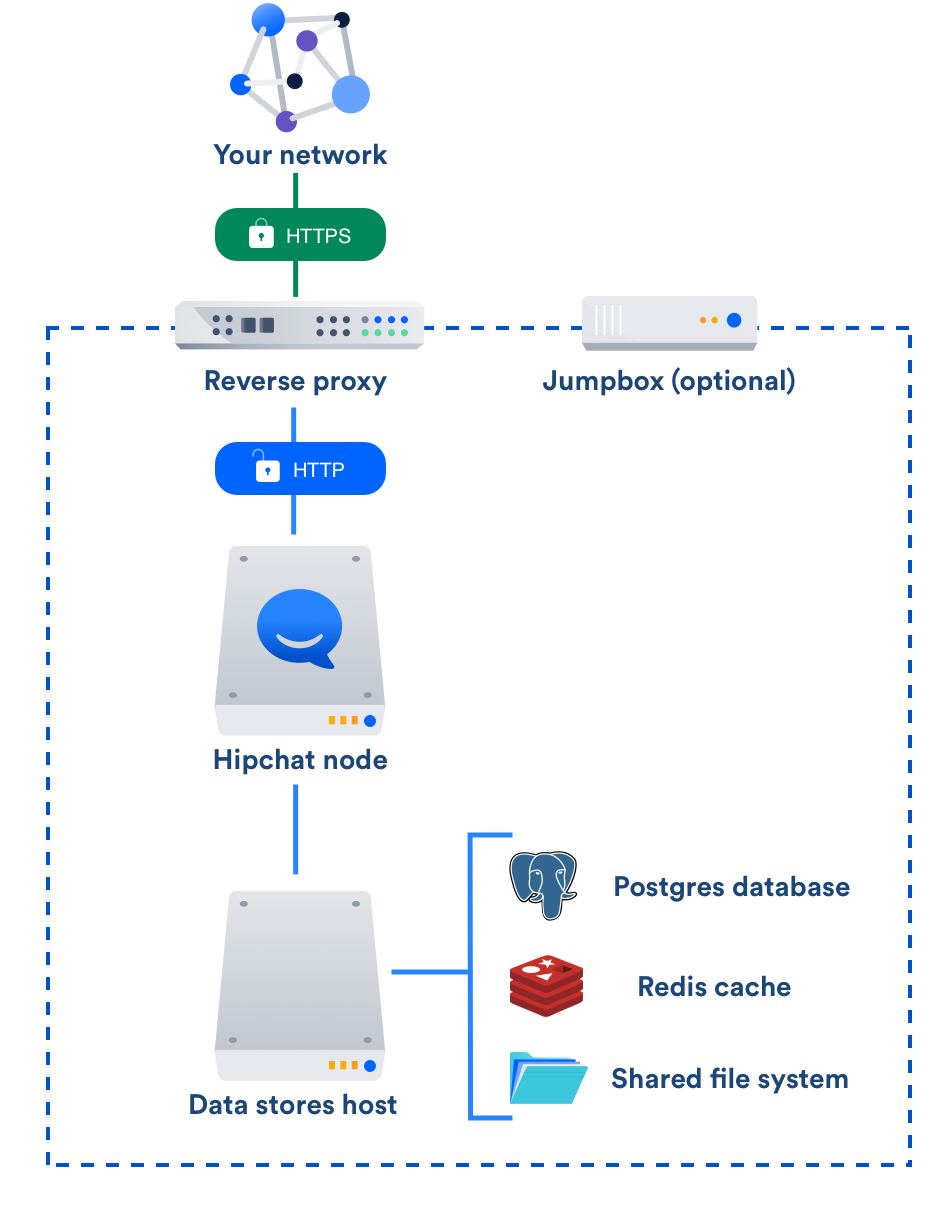 Depending on which Hipchat features you choose to enable, you may need to unblock or write firewall rules for the following ports. If you are using a forward proxy, you can use it to access most of these services without writing rules.

You may use any reverse proxy that meets the following requirements:

If you will be using publicly hosted Apps, add-ons, or integrations, the service should be accessible from the public internet so that these external services can send responses back to the cluster.

See the Hipchat Knowledge Base article for more detailed instructions on setting up a basic NGINX reverse proxy for a small-scale Hipchat Data Center.

See the Hipchat Knowledge Base article for more detailed instructions on setting up a basic Redis cache for Hipchat Data Center.

See the Hipchat Knowledge Base article for more detailed instructions on setting up a basic NFS server for Hipchat Data Center.

See the Hipchat Knowledge Base article for more detailed instructions on setting up a basic Postgres database for Hipchat Data Center.

Once the Postgres instance is running, create a database and service user:

For clarity, we recommend putting the word 'hipchat' in the database name, and in the name of the user that you create to access it. This will help you if you ever need to troubleshoot.

ℹ️   Need some help? Click here for some example commands

Set up the Hipchat VM

In this step you'll create the virtual machine using the OVA file, and configure it.

From the VM's console:

The node must have a unique hostname, which must be unique among all members of the cluster. (We know it's tempting to just call it hipchat, but resist!)

The Hipchat node's name should also be different from the public DNS entry used to access the cluster. (The node requires access to port 53 over TCP/UDP to resolve DNS.)

If your DNS server does not resolve the hostname you set, you can also add an entry similar to the one below to the /etc/hosts/ file on each node.

The Hipchat node must be configured in the UTC timezone, and must keep the time synchronized using NTP. (This requires access to port 123 over TCP/UDP.)

If your environment does not have access to the internet, or if your organization runs its own NTP servers and you wish to use them, you should configure your Hipchat node to use an NTP service inside your network.

To change the NTP servers use the following command. Replace "time1.example.com,time2.example.com" with a comma-separated list of your own NTP servers.