As of June 1, 2015, the IDE Connector documentation will no longer be maintained by Atlassian. See https://developer.atlassian.com/blog/2015/06/discontinuing-ide-connectors-support/

for more information. We will also be making this documentation available for our open source community here: http://atlassian-docs.bitbucket.org/

With pleasure, Atlassian presents version 1.3 of the Atlassian Connector for Eclipse.

You can now perform pre-commit Crucible reviews from within your Eclipse IDE, as well as the post-commit reviews that were already available. Crucible's web interface lets you do reviews on patches, but you must make and upload the patch. Now it is easier and simpler to do a pre-commit review from within Eclipse.

The connector's Bamboo component now displays builds that are in progress or in the queue, as well as the completed builds.

We are delighted to announce that the connector's JIRA component is now much faster. The team has been working with Tasktop on a number of improvements, now available with the latest Eclipse Mylyn release 3.3. In particular, you will notice a marked reduction in the time it takes to load your JIRA issues into the IDE.

There are a number of smaller improvements and bug fixes, listed below. Please note also that, effective from this release, the connector no longer supports Eclipse 3.3 (Europa).

Don't have the Atlassian Connector for Eclipse yet?

You can install the connector directly from the Eclipse software updates manager or from a zipped archive. Follow our installation guide.

Highlights of this Release:

We love your feedback!

Please log your issues, requests and votes. They help us decide what needs doing.

This is an open source project. You can get the source code from our SVN repository.

Unfortunately due to a bug with the REST API, this release of the Atlassian Connector for Eclipse will not work with Bamboo 2.3. We are working on a fix for this. As a workaround, please consider upgrading to the latest Bamboo release.

Would you like your team members to review your code before you commit it to the repository? Although Crucible's web interface lets you do reviews on patches, you need to make and upload the patch before you can do the review. Now you can use the connector to do a pre-commit review from within Eclipse. The review gathers your local working copies of the files and makes them available to all reviewers for comment. 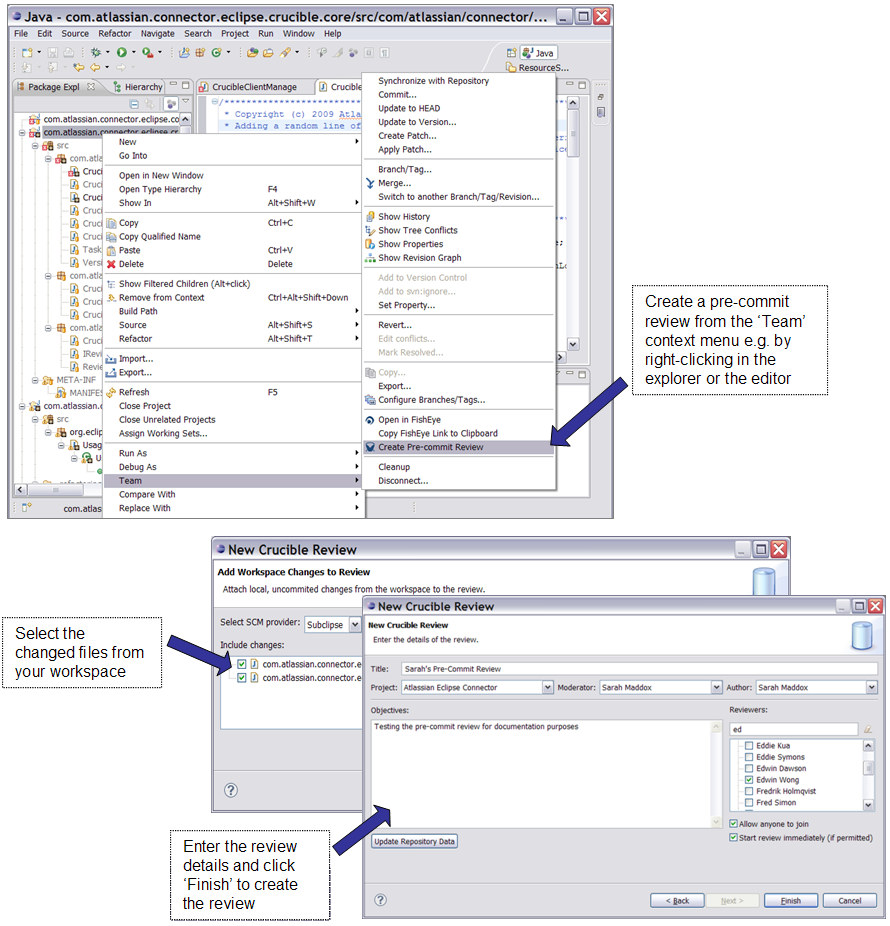 You and your reviewers can then open the changed files in Eclipse and add review comments, even though the changes have not yet been committed to the source repository. (Note: Currently the connector supports pre-commit reviews with Subclipse and Subversive only. You cannot yet do pre-commit reviews using CVS.) 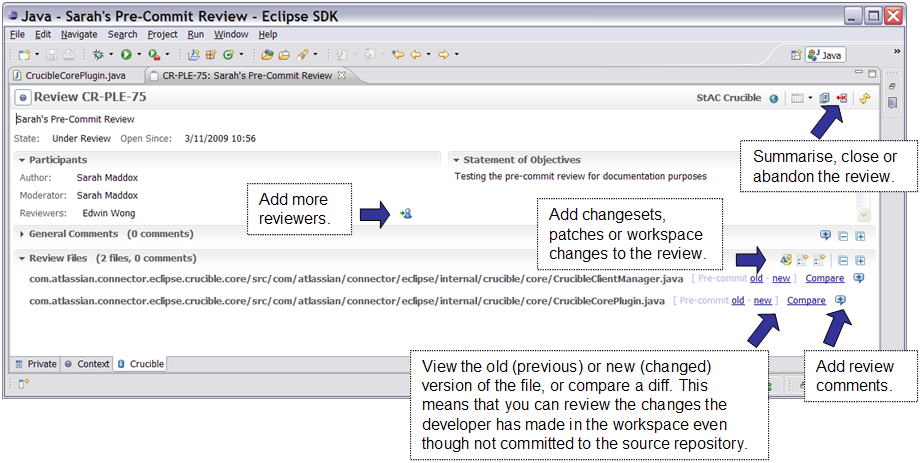 Bamboo Builds in Progress or in Queue

The connector now displays builds that are in progress or in the queue, as well as all completed builds. Note that you need Bamboo 2.4 or later to make use of this feature.

Thanks to lazy and smarter fetching and generally improved RPC handling, the connector's JIRA component is now much faster. Now available with the latest Eclipse Mylyn download, the efficiency and other improvements are the result of our work with the Tasktop team. See the Mylyn release notes for Mylyn version 3.3. Here is a summary:

This release brings a number of bug fixes and improvements. The following items are worth a special mention: