Capacity and velocity planning was introduced in Advanced Roadmaps version 3.28. If you’re using an earlier version of Advanced Roadmaps, this process may be different or not available in your instance.

To view capacity on your timeline, go to the View settings menu, and select Team or Sprint from the Group by menu. This will organize your issues into swimlanes. Select the checkbox next to Show capacity on timeline to finish.

Before you can monitor capacity, you must first associate the teams in your plan with the corresponding issue sources.

When making a plan, we recommend that you use boards as your issue source. This allows you to manage active sprints, plan future capacity, and assign issues to sprints directly from your plan. Issues pulled from other sources such as filters or projects will appear as external sprints in your plan.

Read capacity on your timeline

Once you’ve added capacity to your timeline, you’ll see a sprint status bar with extra tabs that each correspond to a sprint. The green bar in the sprint tab indicates current capacity. If you continue to assign issues to that sprint, the bar will turn red when the work assigned to the sprint exceeds its capacity. Learn how to manage capacity.

Select a sprint on the timeline to bring up the sprint capacity window: 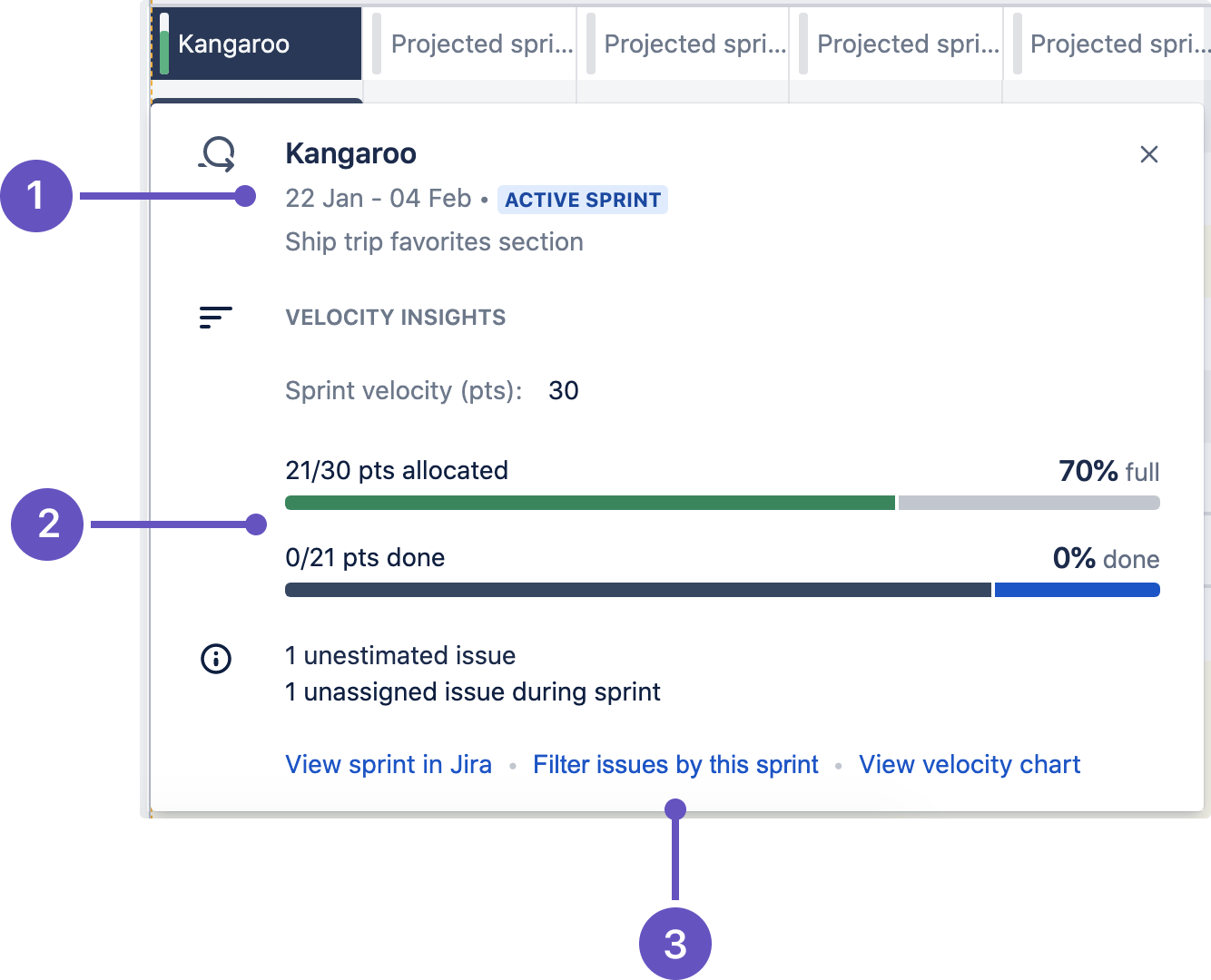 Past sprints are unnamed representations of what past iterations would have been if the sprints existed at that point. They're created based on sprint length and are used for demonstration purposes only. The sprint capacity window won’t appear when you hover over the sprint status bar.

An Active sprint is the sprint that's currently in progress and has an ACTIVE SPRINT lozenge next to the dates.

When auto-scheduling work in a plan, issues will be scheduled into the next available future sprint, based on the remaining sprint capacity. Issues won’t be assigned to a currently active sprint.

If there’s any unexpected change in a team’s capacity (for example, a team member is sick), you can quickly update the sprint capacity in the active sprint’s menu.

Any sprint that already exists in Jira Software and is scheduled after the active sprint is called a Future sprint and will have a FUTURE SPRINT lozenge next to its name. Even though a sprint can only be given dates when it becomes active, Advanced Roadmaps is able to infer future sprints based on the iteration length.

Any sprints that are projected to take place beyond the scope of existing future sprints will also be displayed in the timeline. These are called Projected sprints and will have a PROJECTED SPRINT lozenge next to the dates.