We've added a lot to our latest update and we need your help to get all this new goodness installed.

To install the new version of SourceTree:

You can also reference the most recent Release Notes.

You can downgrade to a previous version if you kept the old installer. However, due to the new installer, configuration files may not be backwards compatible.

What you get with this newer version

We added the following:

The new installers also support progressive feature rollouts so we can ship new features to a subset of users, monitor for any regressions, address anything that is found, and then roll the feature out to all users. This will be a great help in providing a more stable experience for users.

More about the authentication changes

Currently SourceTree only supports  Basic Auth credentials for communication with Bitbucket and GitHub services. This is true for Git, Mercurial, and REST API calls. Both Bitbucket and GitHub recommend the use of Two Factor Authentication (2FA) to secure your accounts. Unfortunately, the use of two-step authentication prevents the use of Basic Auth for authentication. Which meant switching to SSH for Git and Mercurial URL's. While this works, SSH is still a little strange in a Windows environment.

The use of OAuth means it is now possible to support HTTPS URLs while using a 2FA protected account. Additionally the GCM also manages credentials using Windows Credentials Manager, or Vault, a secure part of the Windows OS.

Click here to learn why this matters for this update

SourceTree and Bitbucket have not been able to take full advantage of these improvements: the current release of the GCM does not support Bitbucket OAuth for HTTPS URLs and SourceTree has not supported OAuth for git/hg or REST API calls. This has meant, when using SourceTree, you have the following choices:

SourceTree 1.10 begins to address this problem by:

We made considerable changes to Account creation and management in SourceTree to support OAuth and the Windows Credentials Manager.

We've removed the Account editing dialog in Edit Accounts (in the View>Show Hosted Repositories section).  Then we updated the Authentication tab (in the Tools>Options section).

You can now manage your accounts and authentication methods in this one consolidated tab: 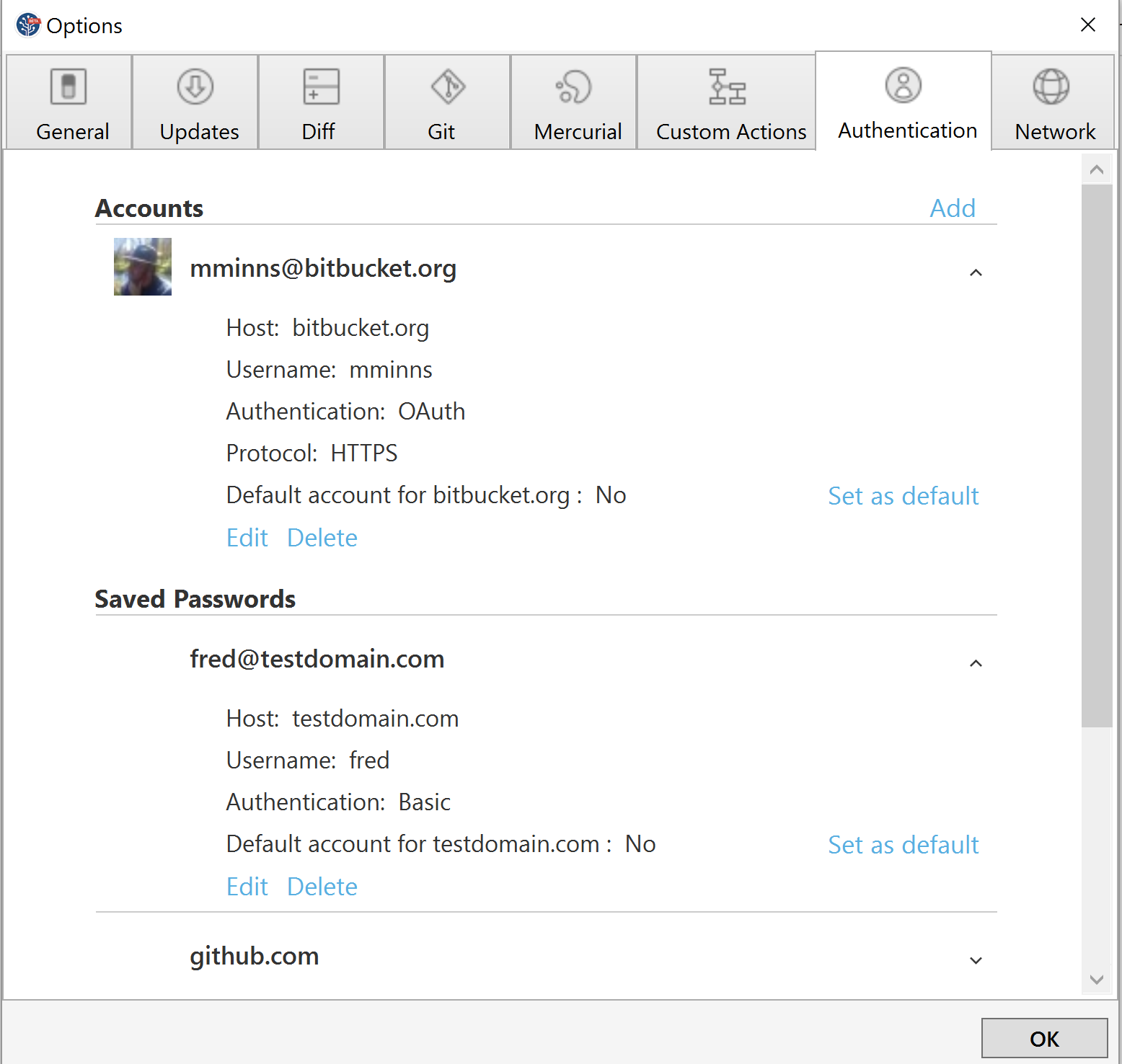 The Authentication tab lists your SourceTree managed accounts. We store credentials for these accounts in the Windows Credentials Manager. This makes them available for REST API calls and Git/Mercurial interactions through both the standard and SourceTree's custom Git Credentials Manager (GCM).

It is also possible to set an account as the default for a hosting service like Bitbucket. This means SorceTree uses these credentials (the username and Basic Auth password or OAuth token) when no username is specified in a Mercurial or Git URL.

You can define existing credentials as the default for a given Host.

Path parameters and other directory and install details

The standard Git Credentials Manager ships with Git for Windows releases. This is installed in

It is referenced by git via the credential.helper git config setting, see https://git-scm.com/docs/gitcredentials

The SourceTree customization of GCM is installed into

SourceTree is able to use this version by adding

The user is only prompted if neither the standard nor the customized GCM can provide suitable valid credentials.