All traffic sent between the agents located in EC2 and the Bamboo server is tunneled through an SSL-encrypted tunnel. The tunnel will be initiated from the Bamboo Server to the EC2 instance, which means that you don't need to allow any inbound connections to your server. You will need to permit outbound traffic from the server on the tunnel port, however - the default port number is 26224. On the EC2 instance, only the tunnel port needs to be open for inbound traffic.

SSL tunneling is not implemented for VCS (Version Control System) to EC2 traffic though. You will need to make your VCS available for access from EC2 to use Elastic Bamboo. See the section on setting up your VCS for Elastic Bamboo, which contains guidelines on securing your VCS.

Be warned that just as with a regular host accessible from the Internet, if one of your remote agent instances is compromised, your Bamboo installation may be exposed to number of security vulnerabilities. These include confidential data (e.g. source code, VCS credentials) being stolen, malicious code being injected into elastic agents, unauthorized access to build queues and false information being submitted to Bamboo servers. Given that all Bamboo-related traffic is sent through a single encrypted connection, the risk of that happening is not high and can be further mitigated by setting up a VPC (Amazon Virtual Private Cloud). In a VPC, your elastic instances typically have no public IPs which means they are inaccessible from the internet other than through a regular, industry-standard VPN connection.

The EC2 security groups can be accessed via the AWS management console (see Security groups in the left-hand menu under Configuration). 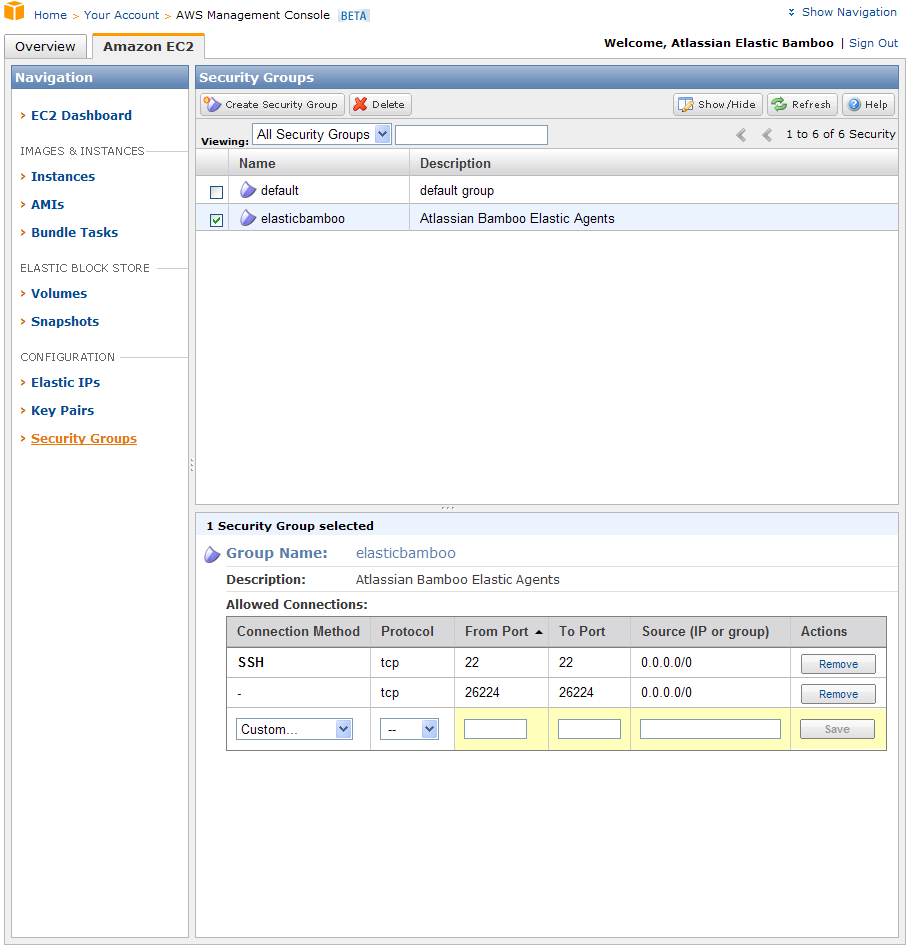 If you wish to permit additional connections to your EC2 instance, you can do this by adding entries to the Allowed connections section for the elasticbamboo security group. See the previous section on Default EC2 Access Rules for instructions on how to access your EC2 security groups.

Using a VPC means that your agents (and other instances launched in the VPC) will not be available on the Internet. There are several basic scenarios that can be realized using a VPC:

You only need to do this if you aren't using a VPC for agent connectivity. See using Bamboo with VPCs for more information.

As SSL tunneling is not implemented for VCS to EC2 connections, you will need to make your VCS accessible to the public internet to use Elastic Bamboo. If your VCS is behind a firewall this will involve configuring an access point in your firewall. Consult the documentation for your firewall software for details on how to do this.

We highly recommend that you secure access to your VCS by enabling the authentication and access control features on your VCS. Consult the documentation for your VCS for details.

We also highly recommend that you use encrypted connections for your VCS (e.g. SSL). Consult the documentation for your VCS for details.