Use Docker images as build environments

Bitbucket Pipelines runs your builds in Docker containers. These containers run a Docker image that defines the build environment. You can use the default image provided by Bitbucket or get a custom one.

We support public and private Docker images including those hosted on Docker Hub, AWS, GCP, Azure and self-hosted registries accessible on the internet. (Bitbucket Pipelines cannot currently access Docker images that cannot be accessed via the internet.)

If you don't specify a Docker image to use as your build environment, Bitbucket Pipelines will use a default one that we have built with some common tools.

The default image is atlassian/default-image:latest. You can also specify the version:

Best practices tip: after you have Pipelines working, try to find a specific image you can use to not rely on our default image. We don't upgrade it very often, to maximise compatibility for customers who rely on it, and it includes many tools you might not need. This means you'll likely get bug fixes and faster builds from using your own, smaller build image.

If the default environment does not exactly meet your needs, your first step should be to see if a public available image on Docker Hub will help. Here are some of the official images available on Docker Hub that we recommend and configure in Pipelines during setup:

To use these images or another public image on Docker Hub as your build image, see the guide for Using public build images below.

To use an existing Docker image from your own registry, see the guide for Using private build images below.

To build your own Docker images, see the guide for Creating a custom build environment below.

You can use existing public images hosted on Docker Hub, another registry, or in a self-hosted registry. You can only use images that can be be accessed via the internet.

In the examples below:

You can find the name of the image by looking at the pull command listed (1) on the relevant dockerhub page:

If you don't specify the tag, Docker uses the latest version tag:

Here's an example with both image version and account on Docker Hub:

If the image is not provided by Docker and is hosted in a private registry, the image name should include the URL:

To authenticate with a private Docker registry, including self-hosted registries and private images on Docker Hub, Amazon ECR and Google GCR, you need to provide a username and password as part of the image configuration in your YAML file. You can also optionally include an email address, which may be required by some providers.

You can use secure variables to configure username and password variables, then add them to the image YAML configuration as shown below:

If the image is hosted by ECR, you can provide the access key and secret key via secure variables under an additional "aws" section in your YAML image configuration:

To pull an image from GCR, you need to configure a service account for Pipelines with "Viewer" access in your GCP admin console: 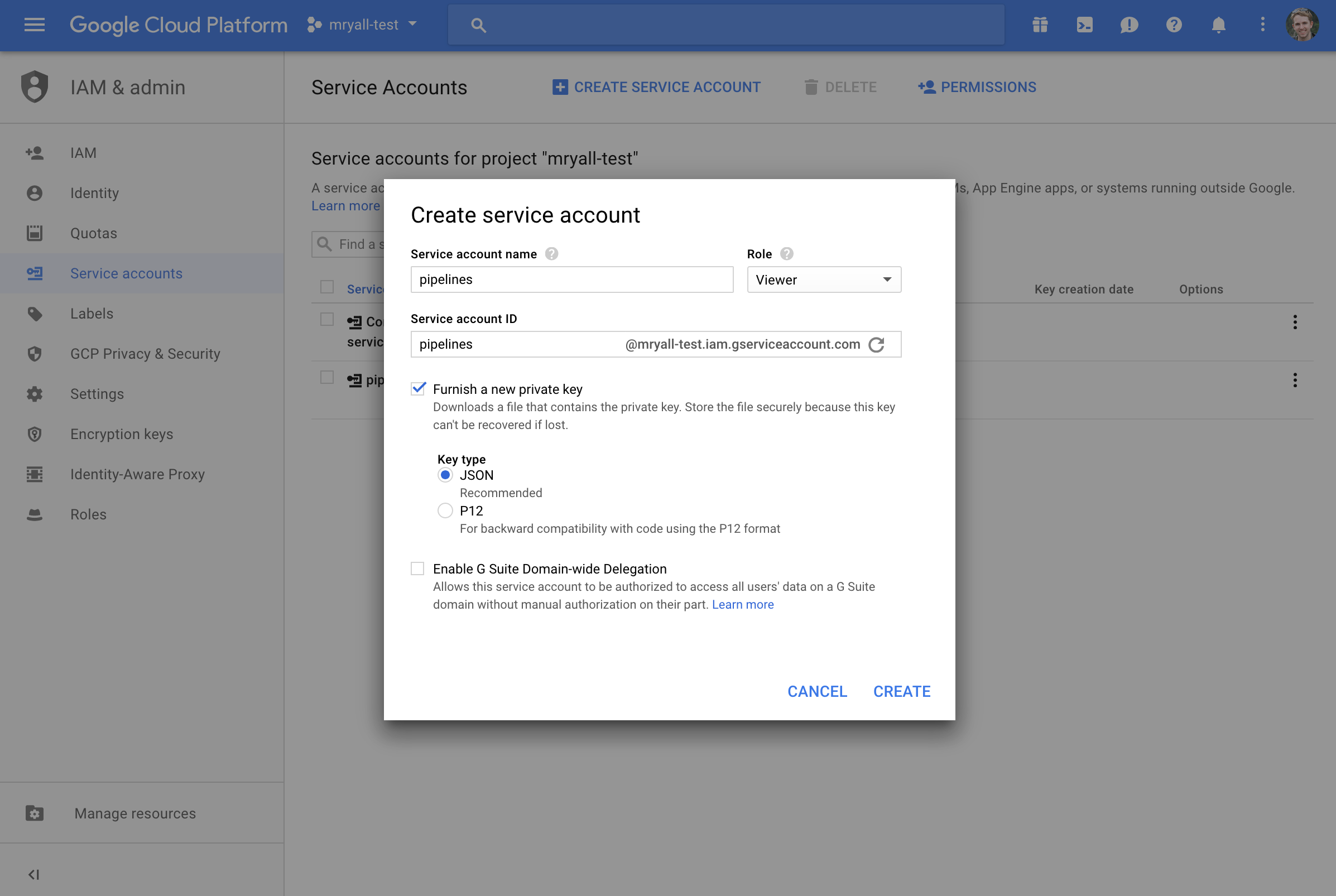 Download the generated JSON private key, and copy/paste it into a secure variable in Pipelines. The configured variable can then be used directly in the password field in your YAML image configuration as shown below:

Images hosted on other registries

To use another private registry, you must provide the registry URL in the image name, and username/password credentials as shown below:

To ensure that an image cannot be modified, you can refer to an image by its hash or digest value. The digest is a cryptographic hash, that changes whenever the content of an image changes. Pinning the digest of an image is the surest way to guarantee that no changes can be introduced.

An image's default user can be overridden by specifying a user UID as the run-as-user. The specified user UID must be an existing user in the image with a valid home directory.