This article aims to explain the meaning of the "Bitbucket Server is reaching resource limits..." banner that you might be seeing on your instance.

It is important to note that you might have two different banners displayed by Bitbucket Server:

A yellow banner under heavy load is normal. Do not change any of your configuration parameters at this stage.  Before increasing your configuration limits, you need to monitor the CPU, memory and/or I/O load on the server and verify that the box isn't thrashing, as increasing the ticket limits can worsen your instance performance. This is better explained in the following sections.

Ok. I get that I shouldn't tweak Bitbucket Server's default memory in most cases. How should I budget my server memory then?

It is a simple formula: we should focus on how many concurrent hosting tickets Bitbucket Server allows as well as how much memory is used by a single clone in order to budget the memory usage.

If requests are queued up for more than 5 minutes (throttle.resource.scm-hosting.timeout), they are rejected and the git  clone/fetch/push operation will fail. At this time, the "Bitbucket Server is reaching resource limits..." message is displayed. The message will disappear when 5 minutes have passed in which no requests have been rejected (throttle.resource.busy.message.timeout or server.busy.on.ticket.rejected.within for Bitbucket Server 3.0+). These parameters can be adjusted – see Configuration properties.

See an example of the data that is logged for each type of denied SCM request below:

A [scm-command] ticket could not be acquired (0/1)

To illustrate these stages, see picture below: 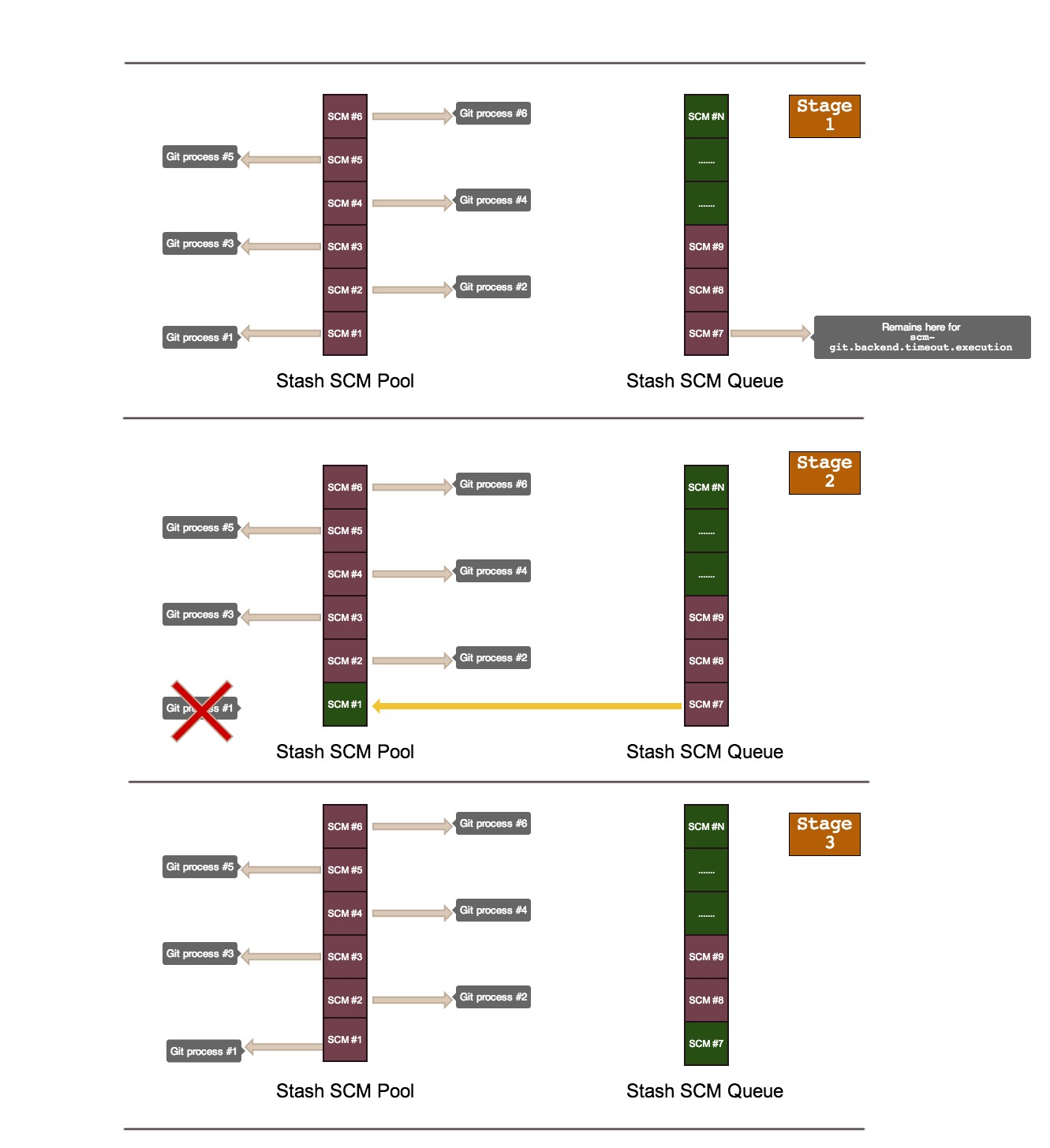 The message should be taken seriously: requests are being rejected and if this happens regularly it's an indication that your instance is not well dimensioned.

Which actions should I take to get around this issue?

The best way to do that is by implementing JMX monitoring.

As explained above, the secret is to have a queue with a number of hosting tickets that is processed quickly by your system. Even if a small queue is formed but emptied before the tickets start getting rejected you should be ok. Common mistakes that customers make and results in  worse performance - don't perform those:

Below are a few actions that should help you get your Bitbucket Server processing hosting tickets faster. Please consider these:

To further reduce the number of calls from a CI server, Post-receive hooks can be set up to replace the polling mechanism.

Running SSL all the way through to Bitbucket Server is another common issue we see in customers hitting this issue. For a better performance, you really need to setup a proxy in front of Bitbucket Server. The Java SSL stack is nowhere near as efficient as any of those and removing this will result in much more efficient processing from Bitbucket Server. Please see Proxy and secure Bitbucket on how to perform this change.

If you're using Bitbucket Server/Data Center 7.4 or later:

Starting in Bitbucket 7.4, ref advertisement caching has been permanently disabled due to architectural changes we made in that version. (See here for details.) These REST API endpoints were also fully removed and made inaccessible as part of Bitbucket 7.8.

Please disregard this section for any versions of Bitbucket beyond 7.4, as the advice listed here for ref advertisement caching no longer applies.

The ref advertisement feature is disabled by default as explained in great details on the Bitbucket Caches page and the Scaling Bitbucket Server for Continuous Integration performance under the Caching section. However, it can produce a noticeable reduction in load when enabled. You shouldn't need to restart Bitbucket Server to accomplish that; you can change it at any time using the REST API calls detailed in Enabling and disabling caching.

It is important to ask yourself the questions below:

Budget your server accordingly. Refer to the Memory budget section as well as Scaling Bitbucket Server  for more details on how to do this.

You can keep the current concurrency limit by adding the following configuration to your bitbucket.properties (create one if it doesn't exist and restart Bitbucket Server so it will load the new file):

How can I monitor the SCM hosting tickets usage without resorting to a thread dump analysis?

I can't identify my performance culprit. What's the next step?

Please open an issue with Atlassian Support. Make sure of the following: