The new fully-featured REST API is designed for use by client applications and provides a foundation for future work. Having built the API, we used it to rework Crowd's Apache and Subversion connectors. Another focus of this release is the improved performance provided by the new database-backed caching, LDAP connection pooling and Apache/Subversion connectors.

You can download Crowd from the Atlassian website. If upgrading from a previous version, please read the Crowd 2.1 Upgrade Notes.

Crowd 2.1 introduces a new set of REST APIs for use by applications connecting to Crowd. This is especially good news for people developing a custom application connector.

The REST APIs offer the following features to client applications:

In addition, client applications can add, update, remove and retrieve the following entities from the user base:

See our guides to the new APIs and REST resources.

This improvement satisfies more than 100 votes. See our documentation on integrating Crowd with Apache and with Subversion.

Database-Backed Caching for All LDAP Directories

Earlier versions of Crowd provided in-memory caching for LDAP user and group data. In Crowd 2.1 the LDAP cache is stored in the Crowd database, resulting in significant performance improvements. Read-only queries will hit the database and not the LDAP server. Queries on LDAP data will perform as efficiently as queries on the Crowd internal directory. This is particularly useful for large LDAP servers which may respond poorly to searches for users.

Details are in the documentation. 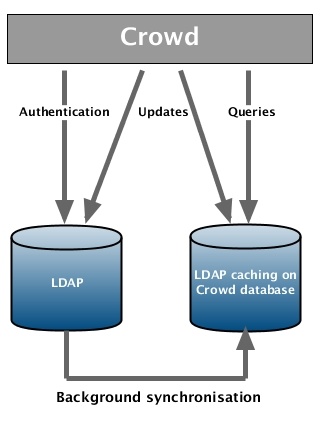 Crowd now supports connection pooling for your LDAP servers. The LDAP service provider maintains a pool of connections and assigns them as needed. When a connection is closed, LDAP returns the connection to the pool for future use. See the documentation.

Connection pooling cuts the overhead of making the LDAP connection. Sites using Active Directory with SSL will see performance on par with an unsecured connection. This is an order of magnitude improvement over Crowd 2.0.

When someone has forgotten their password, Crowd no longer sends them a new password. Instead it sends them a unique, random URL and prompts them to choose their own new password. There are a number of advantages to the new workflow: