Getting started with Bitbucket Server and AWS

Bitbucket Data Center is an excellent fit for the Amazon Web Services (AWS) environment. Not only does AWS allow you to scale your deployment elastically by resizing and quickly launching additional nodes, it also provides a number of managed services that work "out of the box" with Bitbucket Data Center and that handle all their configuration and maintenance automatically. 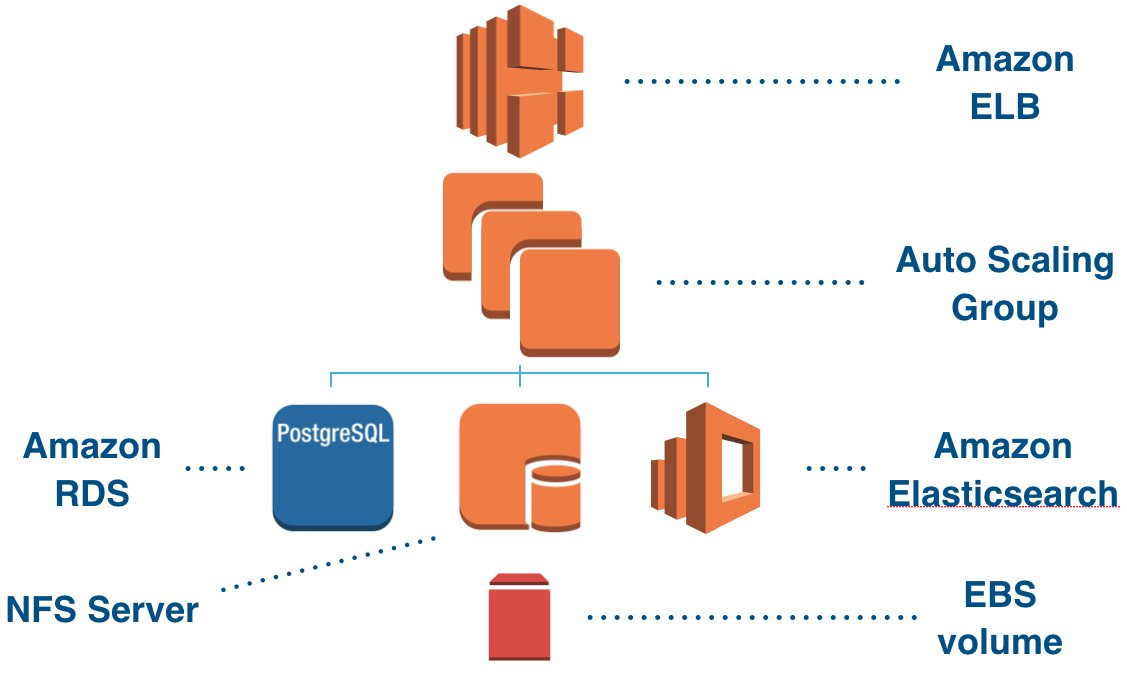 This deployment consists of these components:

Amazon also publishes Quick Starts  as standard, automated reference deployments for a number of key applications in AWS. Each Quick Start launches, configures, and runs the AWS compute, network, storage, and other services required to deploy a specific workload on AWS, using AWS best practices for security and availability.

AWS CloudFormation and Quick Starts do not incur any additional AWS charges, though of course you must pay for all AWS resources launched via CloudFormation normally with your usual AWS account billing process.

Note: The Bitbucket Data Center Quick Start is not available in some regions, such as govcloud-us (AWS GovCloud (US)) and cn-north-1 (China (Beijing)).

Scaling up and down

To increase or decrease the number of cluster nodes

It may take several minutes for the Auto Scaling Group to detect and apply changes to these parameters.

Unless you specify the same number for Minimum and Maximum number of cluster nodes, the Auto Scaling Group is allowed to launch new cluster nodes and terminate existing ones automatically to achieve the optimal desired number of nodes between these two limits. By default, this target number is determined by the following CloudWatch metrics:

A default "cooldown" period of 10 minutes between scaling events is also applied. See Scaling Based on Metrics for more information.

Note: Adding new cluster nodes, especially automatically in response to load spikes, is a great way to increase capacity of a cluster temporarily. Beyond a certain point,  adding very large numbers of cluster nodes will bring diminishing returns. In general, increasing the size of each node (i.e., "vertical" scaling) will be able to handle a greater sustained capacity than increasing the number of nodes (i.e., "horizontal" scaling), especially if the nodes themselves are small. See Recommendations for running Bitbucket in AWS for more information.

Connecting to your nodes over SSH

Sooner or later you will need to SSH to your Bitbucket cluster node(s) and file server to perform configuration or maintenance tasks. Note that you must keep your SSH private key file (the PEM file you downloaded from Amazon and specified as the Key Name parameter) in a safe place. This is the key to all the nodes in your instance, and if you lose it you may find yourself "locked out." See Administering Bitbucket Server in AWS for more information.

When connecting to your instance over SSH, use ec2-user as the user name, for example:

But if you didn't have an SSL certificate set up at initial launch time, or omit the SSL Certificate Name parameter, then your ELB will be configured with only one HTTP listener as follows:

To install or change your SSL certificate after initial launch:

Review the steps in the Bitbucket Server upgrade guide and check the upgrade notes for the version of Bitbucket you are upgrading to, as additional steps to the ones described below may be required!

Note: it is recommended to update the AMI to the latest version before upgrading Bitbucket. For some versions, such as Bitbucket Server 5.0, the latest AMI is required. The latest AMI IDs are referenced in the  BitbucketDataCenter.template in the bitbucket.org repository.

To upgrade a Bitbucket Data Center instance launched from BitbucketDataCenter.template:

Bitbucket Data Center currently does not allow upgrading an instance without some downtime in between the last cluster node of the old version shutting down and the first cluster node on the new version starting up.

Every Bitbucket Data Center instance launched from BitbucketDataCenter.template comes with the Bitbucket DIY Backup utilities pre-installed and pre-configured to use Amazon EBS and RDS snapshots for Zero Downtime Backup. Just SSH to your file server instance and run the following commands:

This script can also be run on a regular schedule (e.g., hourly), from cron. See Using Bitbucket zero downtime backup for more information.

See Set up a mirror for more information.

If you need to fail over from your primary Bitbucket instance to the Disaster recovery standby, you can launch cluster node(s) by updating the Minimum number of cluster nodes parameter in the standby stack, as described in the section Scaling up and down above.

Migrating your existing instance into AWS

To migrate an existing instance into AWS