In some cases the application you wish to test has many components running on separate nodes in a network, or even on disconnected machines. You can use Clover to test such applications, although some additional configuration is required. This page describes how to configure Clover in order to get a per-test code coverage for distributed business logic.

Please note that having an application deployed on multiple machines does not necessarily mean that the application logic is truly distributed. For instance, an application might run on multiple machines for the sake of load balancing, but do not have communication between nodes. We recommend to read the Using Clover in various environment configurations tutorial and especially to have a look at the "Decision matrix" which can help you to decide which approach would best fit your needs.

When deploying your application in container environments, you should also check to ensure that Clover has sufficient permissions to function.

In case you use Maven, ensure that you're deploying an instrumented version of an application archive. If you use "clover2:setup" then the WAR/EAR is named as usual, but if you use "clover2:instrument" then file has a "-clover" suffix and is usually located in the target/clover directory. 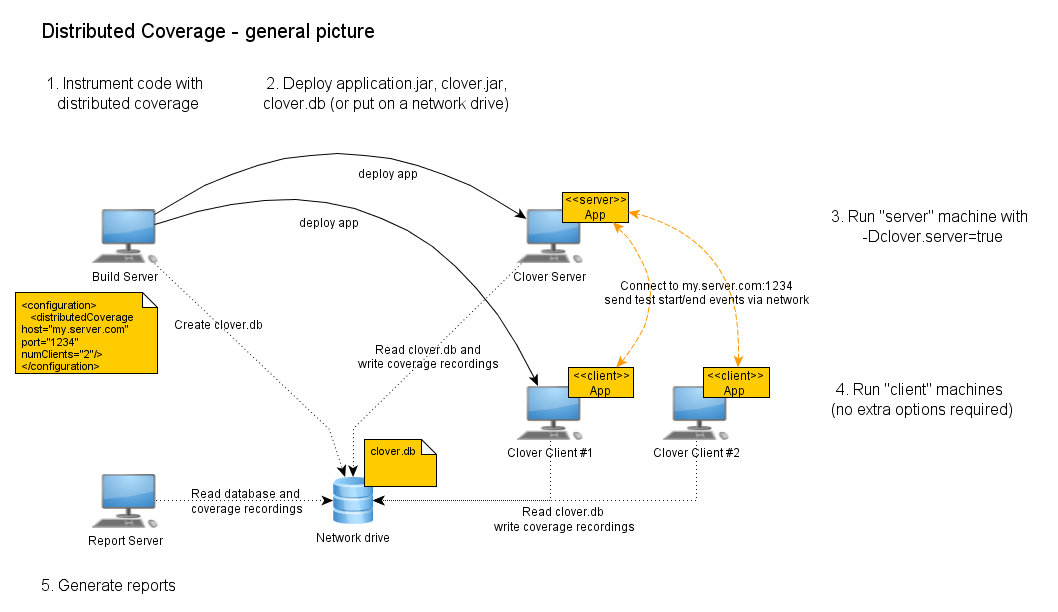 In Clover Distributed Coverage we have two main machine roles:

Clover Server - is a JVM in which Clover sends "test start" and "test end" events in order to inform Clover Clients about test boundaries; Clover opens a port on which it waits for Clover Clients to connect

Please note that Clover's Server/Client designation is actually unrelated with your application structure.

Clover Server is the place where you will typically execute unit tests (or integration tests). These tests will call application logic on Clover Client #N machines.

If unit tests (or integration tests) are executed by a build script, then the Build Server actually performs a role of the Clover Server.

Report Server is the place where Clover reports are generated - it can be the same physical machine as Build Server, of course. 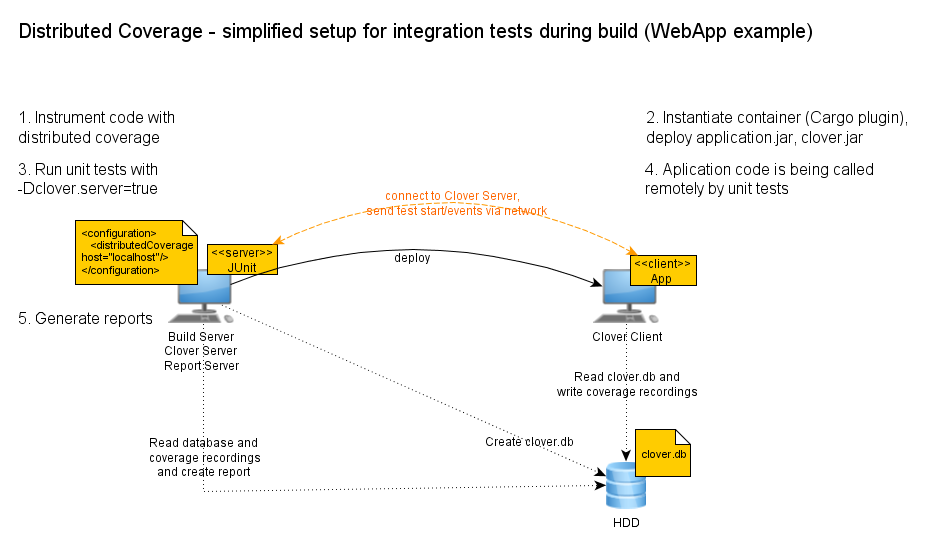 The diagram above shows a simplified configuration used in the WebApp example. There are only two JVMs used:

The first step in setting up coverage from distributed builds is to configure Clover for overall coverage reporting.

At build time, Clover constructs a registry of your source code, and writes it to a file at the location specified in the Clover initialization string (initstring). When Clover-instrumented code is executed (e.g. by running a suite of unit tests), Clover looks in the same location for this registry file to initialize itself. Clover then records coverage data and writes coverage recording files next to the registry file during execution. See Clover Database Structure for more information.

Step 2: Choosing a location for the Clover registry

If you are deploying and running your Clover-instrumented code on different machines, you must provide a way for Clover to find the registry file, and provide a place for Clover to write coverage recording files; otherwise no coverage will be recorded.

You must put clover.jar (or the appropriate Clover plugin jar) in the classpath for any JVM that will load classes that have been instrumented by Clover. How you go about this depends on the nature of the application you are testing and the environment you are deploying to.

The steps below require you to have carried out the previous steps on this page (related to 'Collecting Overall Coverage from Distributed Builds').

Clover's distributed coverage feature is enabled at runtime by making use of command-line options.

This can be done without the need for re-instrumentation or compilation of source files.

In case when you cannot use default settings, you can pass specific value for any of attributes using the "key=value" syntax passed as clover.distributed.coverage value:

Clover also needs to know which JVM is hosting your unit tests ("Clover Server"), by providing the following system property:

This will turn off distributed coverage for the JVM in which this is set, regardless of what was instrumented.

For more configuration options and how to do this in Ant and Maven, see the Clover-for-Ant and Clover-for-Maven 2 documentation.

Server does not wait for clients, despite having numClients != 0 in build configuration

As a consequence, your tests on server will start immediately, without waiting for clients to connect. It can result in lower or zero coverage.

Execution of tests hangs when numClients != 0

It can happen that your "Server" will wait for "Clients" to connect, while Clients will wait until Server starts unit test execution - it depends on how tests are written.

This is a typical case for web applications running in container (like Tomcat, JBoss), when your unit test calls a servlet class (e.g. via HTTP request). The issue is as follows:

In order to avoid this circular dependency you have to: