The Atlassian Bamboo team is proud to release Bamboo 2.7.

In Bamboo 2.7, we've enhanced Plans so that you can map a complete build process into consecutive steps (such as compilation, testing and deployment), all within a single Plan!

Bamboo's Concurrent Builds feature allows you to execute a single Plan concurrently on multiple agents — extremely useful if the trigger for building a Plan fires more frequently than the time it takes to build the Plan.

Do you use a distributed version control system (DVCS) or are thinking of migrating to one? Bamboo now supports Mercurial, so that you can take full advantage of this popular DVCS.

Upgrading to Bamboo 2.7 is free for all customers with active Bamboo software maintenance.

Thank you for your feedback:

Your votes and issues help us keep improving our products, and are much appreciated.

Please keep logging your votes and issues. They help us decide what needs doing!

You can download Bamboo from the Atlassian website. If upgrading from a previous version, please read the Bamboo 2.7 Upgrade Guide.

Bamboo 2.7 allows you to define and map a complete build process in a single Plan. Build steps like compile, test and deploy are mapped to Stages in your Plan, where Stages are processed sequentially. Builds can fail fast if something breaks early in the build process, saving you valuable processing time!

Single build units within a Stage, called Jobs, can be executed in parallel. This enables you to run different suites of tests simultaneously or the same test against different environments, dramatically reducing the feedback cycle within your build process.

To accommodate the features above, Bamboo's Plans now consist of Stages and Jobs, where one or more Jobs can be grouped into a Stage, as depicted in the Enhanced Plan Structure diagram below.

When Bamboo builds a Plan, it starts building all of the Jobs in its first Stage, followed by all Jobs in the second stage and so on. 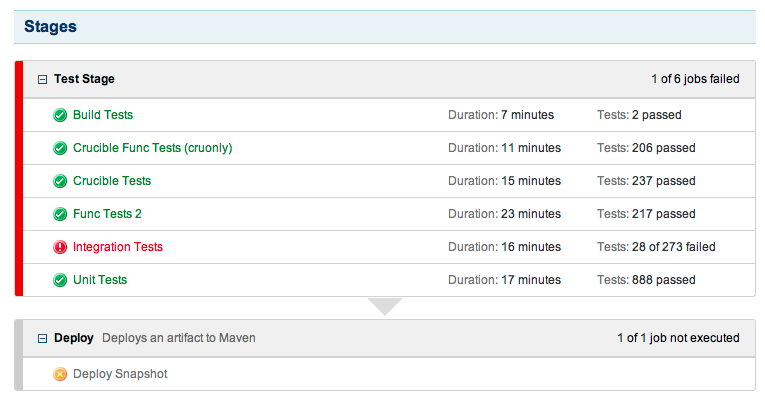 Rest assured that when you upgrade to Bamboo 2.7, your existing Plans will be migrated smoothly into Bamboo 2.7's enhanced Plan structure. For more information please refer to the Bamboo 2.7 Upgrade Guide.

Bamboo's Plan creation features have been simplified. Decide up front how you want to create your new Plan:

The Create a New Plan page is now much easier to use and only shows options that are essential for the Plan to start building its first Job. More configuration options are available when you edit the configuration of your Plan and/or the Plan's Jobs. 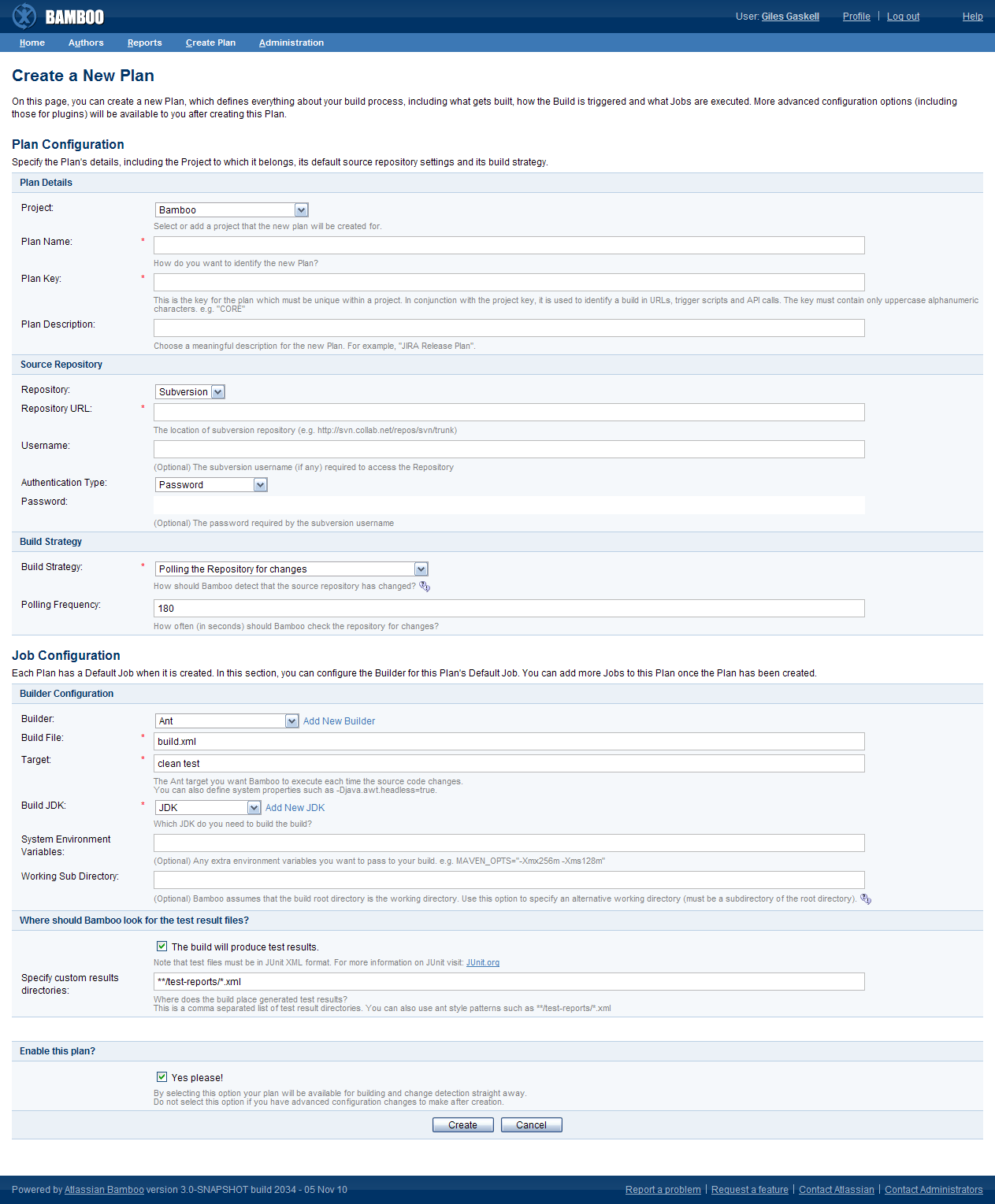 Bamboo's Concurrent Builds feature allows you to execute a single Plan concurrently on multiple agents. This is extremely useful if the trigger for building a Plan fires more frequently than the time it takes to complete building that Plan.

You can easily configure the number of builds of a Plan that your Bamboo server can execute concurrently through Bamboo's administration console. To avoid overloading your Bamboo agents, is recommended this number be kept to a minimum as the number of Jobs in your Plans increases.

Bamboo now supports Mercurial. If you use this distributed version control system (DVCS) or are thinking of migrating to it, you can use Bamboo to build any source code maintained in Mercurial repositories.

The wallboard (formerly known as the build monitor) is designed to present your Bamboo server's latest build results on a whole screen and now has the following improvements:

If you've connected Bamboo to JIRA with OAuth and are using the JIRA Wallboard, you can display Bamboo gadgets on a JIRA Wallboard along with other JIRA and Greenhopper Gadgets, GreenHopper burndown charts, Crucible code reviews and more! 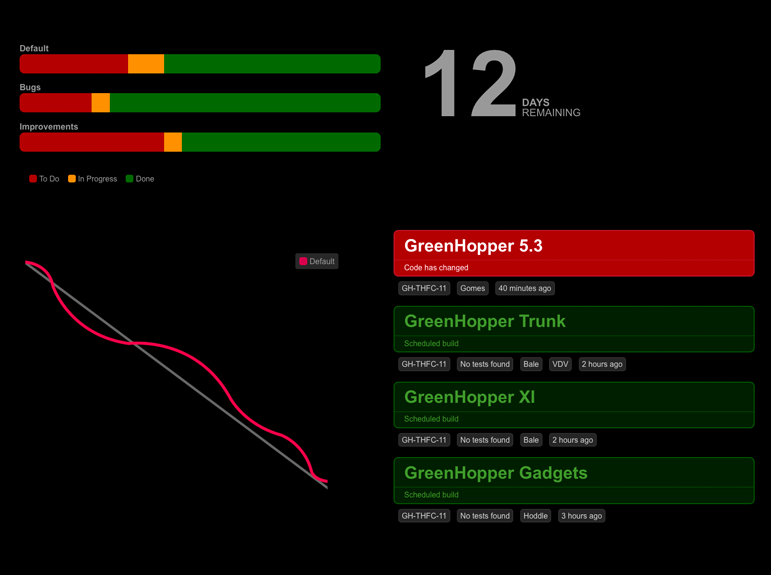 A summary of your Plan's or Job's configuration is available on a single page so that you no longer have to click through a series of tabs to view key settings for any given Plan or Job.

To configure a particular section of a Plan or Job, simply click the 'Plan Configuration' or 'Job Configuration' drop-down menus and select the appropriate option.

Screenshot: Configuration Summary for a Plan 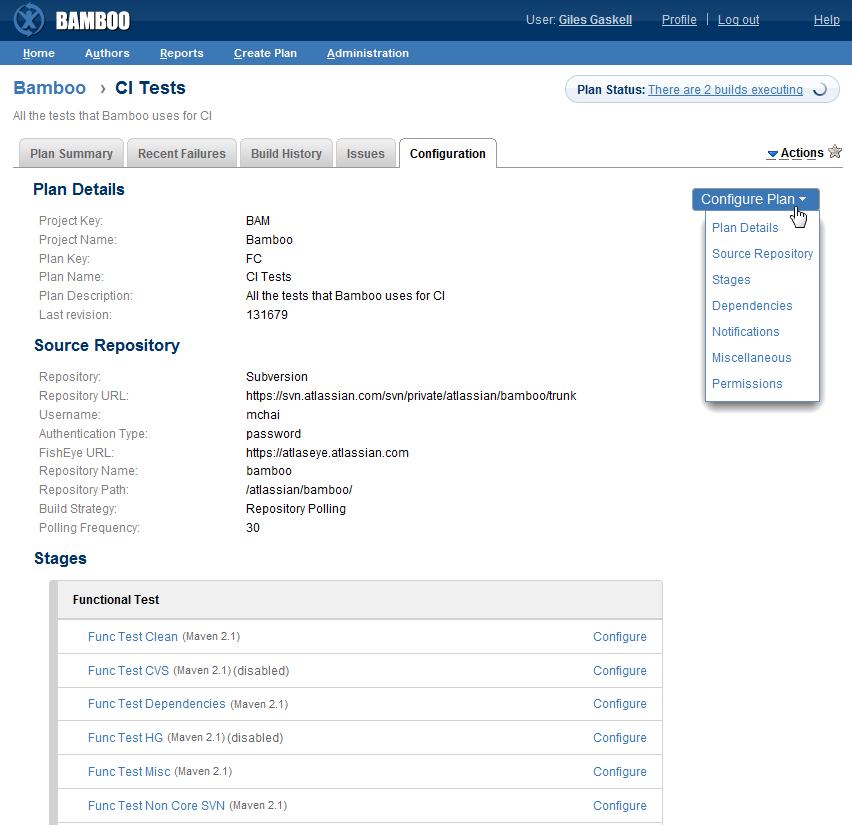 A list of recently built Plans or Jobs is available on their respective Plan Summary and Job Summary pages.

In the Recent History section, clicking on a Plan's build number link, its 'updated' link and test (right-most) link, takes you to the Summary, Changes and Tests tabs respectively for that particular Plan's build. 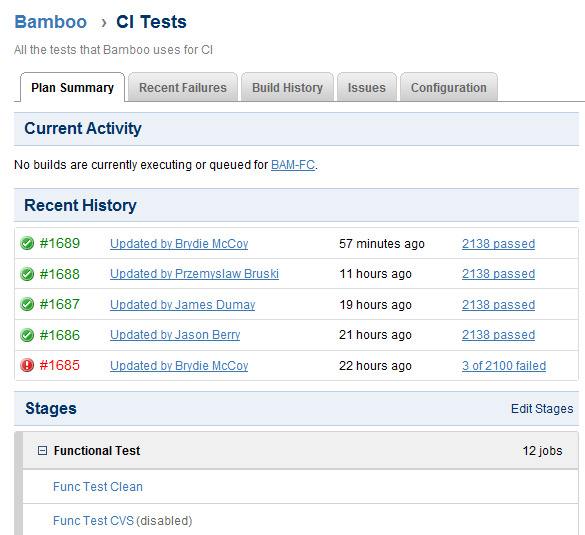 From the Plan Summary tab, you can quickly access the Plan's Job Summary page by clicking the name of the relevant Job in the Stages section (under Recent History).

A new intuitive breadcrumb trail makes it clear where you are. Whether you are looking at a Plan or drilling down into a Job to find out why the Build has failed, you will always find your way back.

The tabs below a breadcrumb change depending on your current Plan context. These tabs provide access to options and data that are specific to your particular context.

Build History tabs on the Plan and Job Summary Views show and expanded version of previous builds in the Recent History lists (above).

The Summary tab of a Plan's and Job's Build Result View has the following useful features, shown in the screenshot below:

Plus over 130 fixes and improvements

Refer to our public JIRA site to see a full list of issues fixed in this release of Bamboo.