We are thrilled to announce the release of JIRA Software Server 7.1.0, our purpose-built application designed for software teams, now made even better!

From our launch in October 2015, we've worked especially hard to introduce new features and improvements, as well as enhance your experience in JIRA Software. From the highly requested sprint management permissions and the Parallel Sprints feature, to having the ability to reopen sprints, print issue cards, select a destination for incomplete issues, and add comments to issue flags, we are bringing JIRA Software to a whole new level.

We also know how valuable integration is to your teams, so we've ramped up our integration tools more than ever — now, you can add webhooks for your boards, use Smart Commits with Bitbucket Server, and troubleshoot application links through diagnostics.

We're very much committed to enhancing the overall user experience in JIRA Software, so we improved the project issue view, as well as tidied up the interface to make creating boards and viewing all boards easier for you, and we fixed some report calculations to get more accurate results in your agile reports. Not only that, we also made JIRA admin changes that will further simplify JIRA Software administration.

We're currently working on several powerful features to enable your teams to go beyond just shipping code, so keep an eye out for future releases!

This release contains major updates and fixes, focused on providing purpose-built experience for software teams. Upgrading from JIRA or JIRA+JIRA Agile to JIRA Software is free for all customers with active JIRA Software maintenance.

We've identified a bug with JIRA platform 7.1 which affects this release. If you've installed or upgraded to this version, and you attempt to install or update an add-on through the Add-ons page, JIRA will report an error. The add-on will be correctly installed, and you will need to perform a restart of JIRA to resume normal operation. The bug should not present itself again. Information on how to stop and restart JIRA can be found on the appropriate operating systems installation guide.

In addressing GHS-5035, JIRA Software now has a new project permission — the 'Manage Sprints' permission. This new permission will be used instead of the 'Administer Project' permission for the following sprint-related actions:

JIRA Administrators can add users to have the 'Manage Sprints' permission in the Permission Schemes page.

Parallel Sprints out of Labs

You can now reopen sprints that have been closed too early, by mistake, or for any other reason. All you need to do is click Reopen Sprint in the Sprint Report of the sprint you want to reopen.

Whether you're planning some work or working on some issues on a Scrum or Kanban board, you can now print your issue cards. You can use the printed cards on a physical board, which can be a replica of your board in JIRA Software.

You can print just one issue card, multiple cards, or even all of them in small-, medium-, and large-size prints.

You can now register board-related events for a webhook in JIRA Software. This lets JIRA Software notify your add-ons or web applications whenever a board is created, updated, deleted, or has its configuration changed. Just choose the desired events when creating or updating your webhooks.

The new "project issue view" for JIRA Software gives you an expanded view of any issue, from within the issue navigator of a project.

Just navigate to Issues in the project sidebar, open an issue, and click the

icon or an issue link in an issue...

And the target issue will be displayed like this...

If you administer a JIRA Software instance, make sure you check out the JIRA 7.1.x platform release notes. We've introduced a number of new features and improvements to JIRA administration, which all affect JIRA Software 7.1.0.

Of course, that's not everything we've done in this release. We also focused on enhancing existing JIRA Software features, to provide your software teams a more seamless experience.

As stated above, we made some changes to the Sprint Report and Velocity Chart calculations. The changes fix inconsistencies in the way values are reported, depending on factors such as:

These changes ensure all the work your team completes in a sprint is counted in these key performance reports. The Velocity Chart now consistently reports these factors in the completed column for each sprint. The Sprint Report now shows initial values and updated values for each item, and the total completed will be accurate.

The fix applies retrospectively to all reports.

We've baked a new diagnostics experience right in to the Application Links plugin, so it's available straight out of the box – you don't have to install or maintain a separate plugin.

You now get instant visibility into the status of your integrations, and focused diagnostics when things stop working: 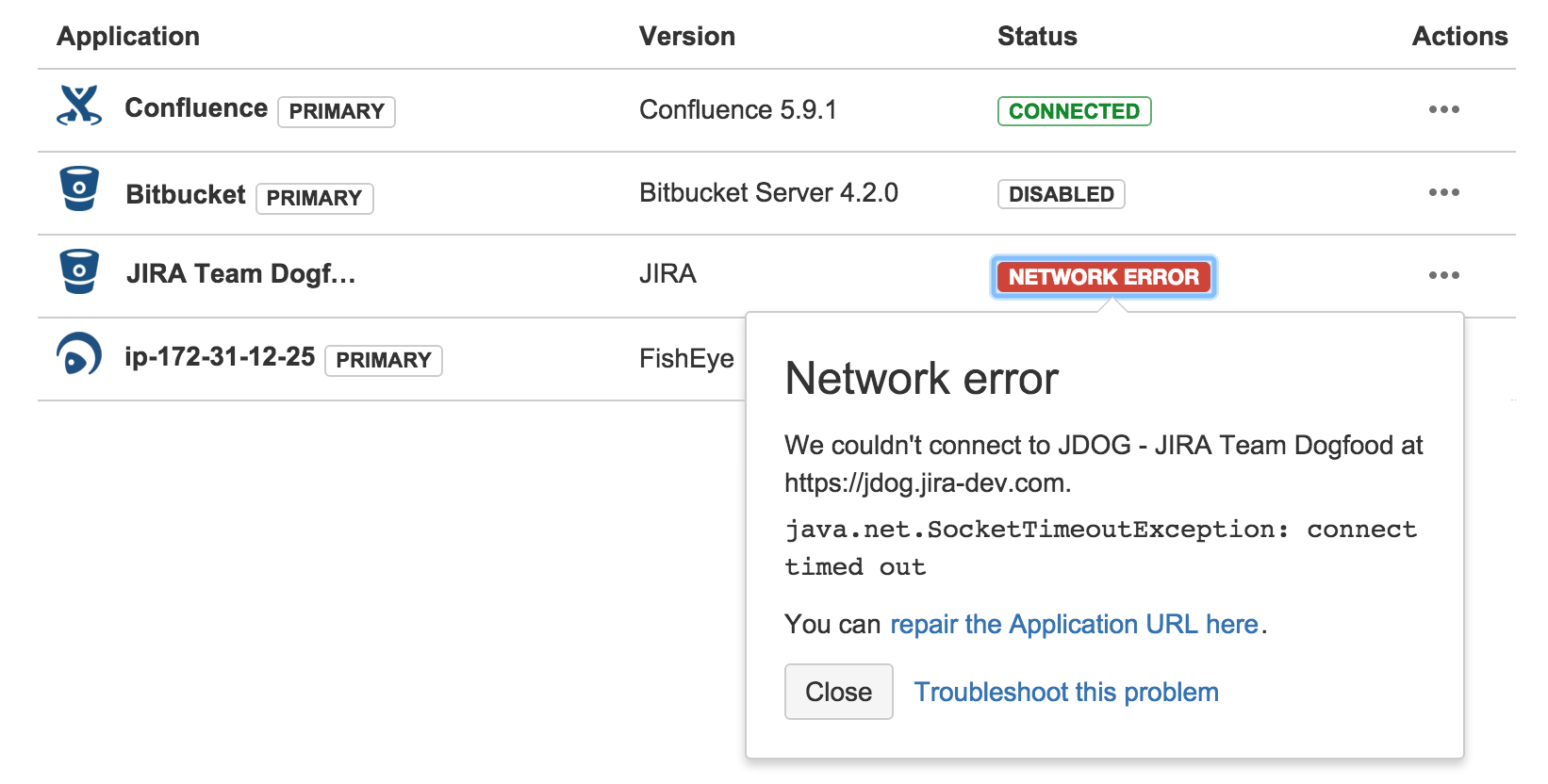 With Smart Commits, you embed specific commands into your Bitbucket Server commit messages that allow you to:

And here are more enhancements that we added to existing JIRA Software features, which now give you the ability to:

This is a minor feature improvement and bug fix release. Note, 7.1.3 was not released to the public.

This release has been canceled due to a bug that affects MySQL and Microsoft SQL Server databases. We are working on resolving this issue for our next release. For more information on the bug you can view JRA-60729 - Getting issue details... STATUS .

This bug only affects customers using Microsoft SQL Server and MySQL databases. If you are not using either of these databases, you will not be affected by this bug. Should you need further assistance please do reach out to us at https://support.atlassian.com.

This release contains an update to our analytics. The update includes an option which allows Atlassian to present a Net Promoter Score (NPS) question and a short survey to users regarding their JIRA application experience. When you first install this release, you'll be presented with a statement regarding the update to the analytics, and you'll be able to decide whether to enable or disable this feature. If you'd prefer to enable or disable the feature at a later date, you can do so by selecting

> System, and then selecting Analytics in the Advanced section of the sidebar. The feedback we gather will be used to help us improve the user experience for all our customers.

This is a minor release and does not include any fixes or features.

This release includes a fix for the critical security vulnerability advised in JIRA and HipChat for JIRA plugin Security Advisory 2016-09-21.