Each milestone release has passed all our automatic tests, and has been used for one week on our official internal Confluence server. Most of the issues solved have been reviewed too.

Milestone releases may not have not been load- or stress-tested, or maybe they have but some performance problems still persist. So, for example, they might behave well on a small installation but show severe problems when subjected to many users.

Follow the normal upgrade instructions to upgrade from Confluence 2.7.x to this release. We strongly recommend that you backup your confluence-home directory and database before upgrading!

This page describes the changes you can expect from Confluence 2.8 Milestone 7. M7 is a "small" milestone that delivers some features that just didn't make it into M6, but which can't wait for M8 nor RCs either because we need your feedback as soon as possible!

The title is not duplicated anymore, you simply edit the title directly 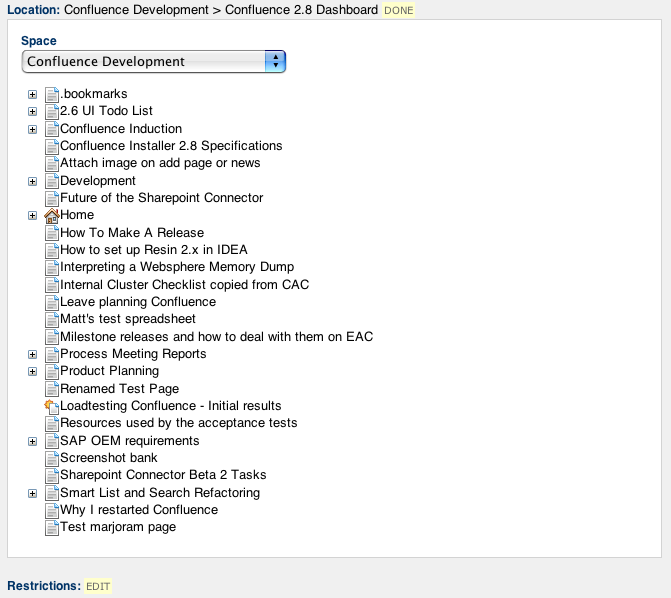 For plugins which configure Confluence's web interface, Condition implementations which depend on GlobalHelper are now deprecated, and should be converted to use the new WebInterfaceContext interface. The easiest way for most plugins to do this is to extend BaseConfluenceCondition rather than the now-deprecated AbstractConfluenceCondition. (Javadoc links to come once this is published.)

We are in bugfix-mode now. While a few icons and CSS-styles will still change, the main priority is now to iron out all our bugs during the next two weeks.