Welcome to our Beta Phase

The Confluence team is proud to present the first public beta release of our upcoming Confluence 3 release. It contains all the features we intend to ship. We will be publishing Beta 3 next week, and then a rapid succession of Release Candidates in two weeks. We aim at shipping Confluence 3.0 in (very) early June.

So, calling all plugin developers: If you want to make sure your plugin plays nicely with 3.0 on the launch date, and if you maybe even want to use our new features from within your plugin, this is really the last chance to get started. Download the Beta right now

Note: This is still not a stable release, it is not meant for production use. So our normal Milestone disclaimer still applies:

For testing use only

This release is a public development release ('milestone') leading up to the next Confluence major release. Development releases are a snapshot of our work in progress, allowing our customers and especially plugin developers to see what we're up to.

In supplying milestone releases, our aim is to provide plugin developers with an opportunity to see the latest changes in the code.

Each milestone release has passed all our automatic tests and has been used for one week on our official internal Confluence server. Most of the issues solved have been reviewed too, and all of our milestone releases even have been performance tested for a while.

However, since our milestones releases are timeboxed (that is, they are released every two weeks, no matter how far we have come implementing features and bugfixes) there is always a chance that we have new known bugs that are scheduled to be fixed in the next milestone, or completely new bugs unknown even to us.

Additionally, we have not completed our performance testing and compatibility testing for all supported databases and user management systems. So, for example, a milestone release may behave well on a small installation but show severe problems when subjected to many users.

Follow the normal upgrade instructions to upgrade your test instance to this release. We strongly recommend that you backup your Confluence home directory and database before upgrading!

What is in it?

All the features we intend to ship are available in this beta. Unfortunately. the official documentation is not ready yet, so until we get a more official summary of the new features, please refer to our recent Milestone release notes, and try the beta out yourself.

Since publishing Milestone 9, we have focused on polishing our existing features. Here is a rundown on the changes since then:

Preview button removed and replaced by a refresh icon: 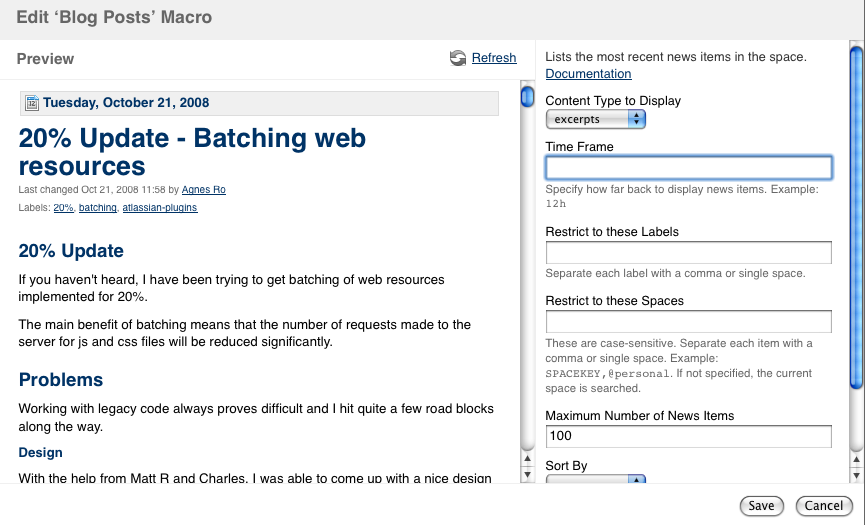 Release Notes 3.0-beta2 ("Beta 2")Inserting a macro via the macro browser would always scroll to the top, which is very annoying if you are editing the end of the page.

Release Notes 3.0-beta2 ("Beta 2") It is now possible to insert more than one macro in Safari via the macro browser!

Release Notes 3.0-beta2 ("Beta 2") Performance improvements on the backend for the viewfile macro.

Also, the initial loading of the Flash front end should be a little snappier. There was a default "pre-load" screen that added 1-2 seconds to the load time. We also changed the background color to white so it also adds the impression of not appearing until it's loaded.

Confluence has been upgraded to the latest releases of Plugins 2 and SAL.

We did a small performance improvement by caching PersonalInformation objects by user name (Release Notes 3.0-beta2 ("Beta 2")), which will in particular speed up the rendering of profile pictures.

As part of this release cycle we fixed a lot of smaller bugs, but the most notable ones were related to content indexing:

Release Notes 3.0-beta2 ("Beta 2") was fixed, so change comments containing ampersands and angle brackets will no longer affect the system.

The Flash preview is broken in Office Connector that is bundled with beta 2. See Release Notes 3.0-beta2 ("Beta 2"). It's already fixed and it will be bundled in Beta 3 next week.