For testing use only

This release is a public development release ('milestone') leading up to the next Confluence major release. Development releases are a snapshot of our work in progress, allowing our customers and especially plugin developers to see what we're up to.

In supplying milestone releases, our aim is to provide plugin developers with an opportunity to see the latest changes in the code.

Each milestone release has passed all our automatic tests and has been used for one week on our official internal Confluence server. Most of the issues solved have been reviewed too, and all of our milestone releases even have been performance tested for a while.

However, since our milestones releases are timeboxed (that is, they are released every two weeks, no matter how far we have come implementing features and bugfixes) there is always a chance that we have new known bugs that are scheduled to be fixed in the next milestone, or completely new bugs unknown even to us.

Additionally, we have not completed our performance testing and compatibility testing for all supported databases and user management systems. So, for example, a milestone release may behave well on a small installation but show severe problems when subjected to many users.

Follow the normal upgrade instructions to upgrade your test instance to this release. We strongly recommend that you backup your Confluence home directory and database before upgrading!

Not quite a beta yet!

While this release is almost feature complete there are still one major technical improvement (superbatching) and one feature (the dashboard-widget) outstanding, so we can't call it beta just yet. Apart from that though, M7 is feature complete. Anything that you don't see here, you won't see in the final product. We will keep fixing bugs (yes, there are still quite a few unfortunately), but if something else in the functionality really annoys you, please raise it with us now! You can add a comment, or you can send us a mail, or of course raise JIRA issues.

The files are not available for download at the moment, they will be added on Thursday. This page is a teaser, and for use by our translators.

Indexing and Searching of Office 2007 files

The contents of Confluence attachments created by PowerPoint 2007, Excel 2007, and Word 2007 are now fully searchable inside Confluence. This includes files with pptx, xlsx, and docx extensions as well as other extensions like potx (PowerPoint template) and dotx (Word template).

You can now preview PowerPoint 2007 files directly in Confluence. We're proud to say that this completes the goal of supporting the new 2007 file formats for the three main Microsoft Office products (Word, Excel, and PowerPoint) in Confluence 3.1. This is in addition to already supporting the legacy binary format. 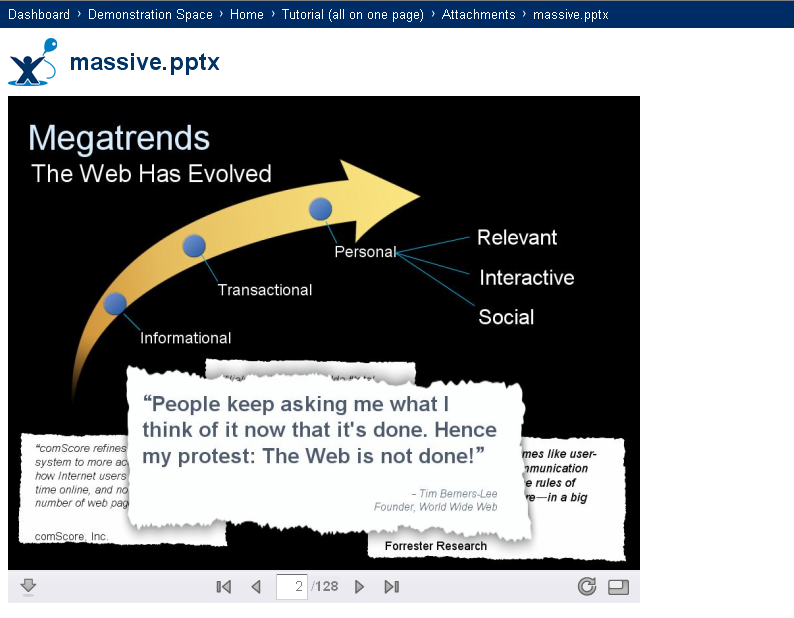 If you are using Flash player 10 or higher, you will no longer see any controls when previewing Powerpoint or PDF files in full screen mode. Instead, you must use the spacebar or the arrow keys to move between the slides. Press escape to exit full screen mode. 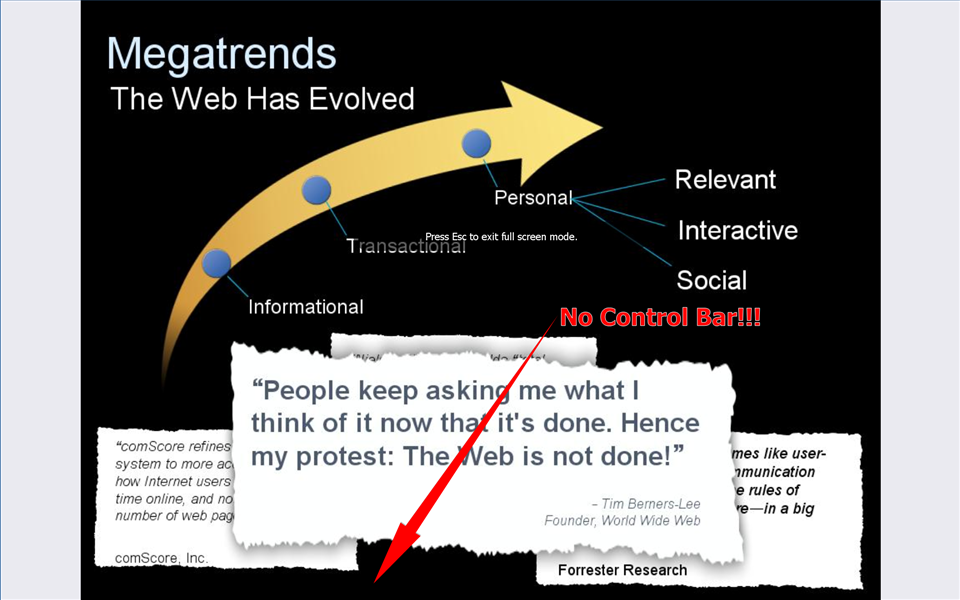 Previously, you had to preview a file to get the option to edit it. We've added a new 'Edit' option to each attachment that will launch the appropriate desktop editor for that attachment. The old 'Edit' option has been renamed to 'Properties'.

Editing user preferences of OpenSocial gadgets in the Macro Browser

As promised in the last release notes we moved the editing of non hidden user preferences to the usual location for macro parameters on the right hand side: 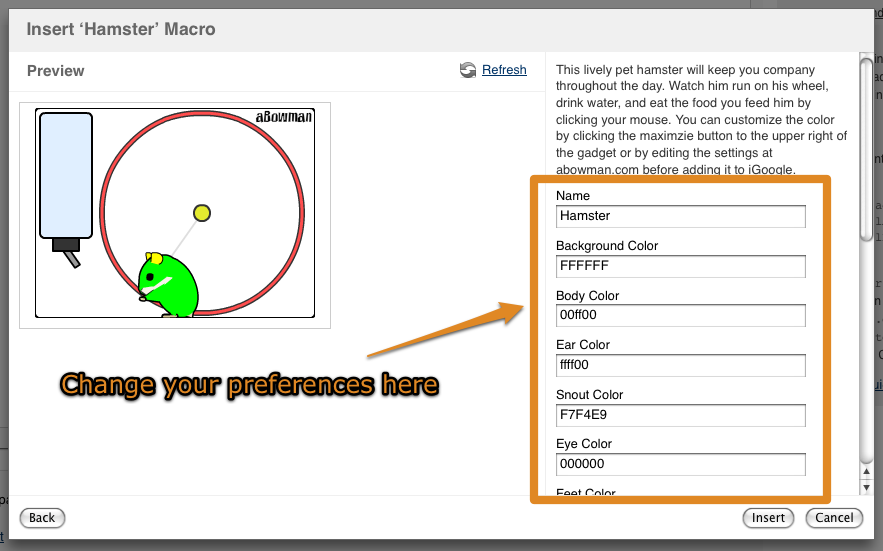 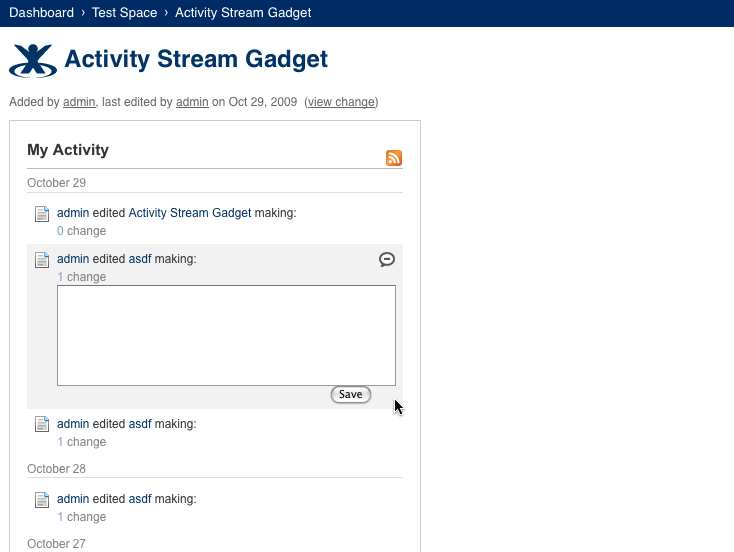 We've added new tabs and improved the design of the new Move Page dialog based on feedback from earlier iterations. Some key improvements:

The move dialog is feature-complete for this release, but we still have a few remaining improvements to make. In particular, scrolling the tree to the correct location when it opens and making the tree completely undraggable will be fixed for the next release.

The new image browser dialog now supports uploading files. The upload proceeds faster than before (because the entire window doesn't need reloading), and you'll get a thumbnail of your image preselected, ready to insert.

We've fixed the bugs with image borders that prevented them working properly in the rich text editor, and enabled borders by default for newly inserted images. The dialog also includes some simple keyboard navigation that should make it more intuitive to interact with. All features of the image dialog have been tested with all our supported browsers.

We also spent some time on improved validation of uploaded attachments and thumbnail generation. The old insert image window is now disabled, so please let us know if you have any problems with the new functionality. 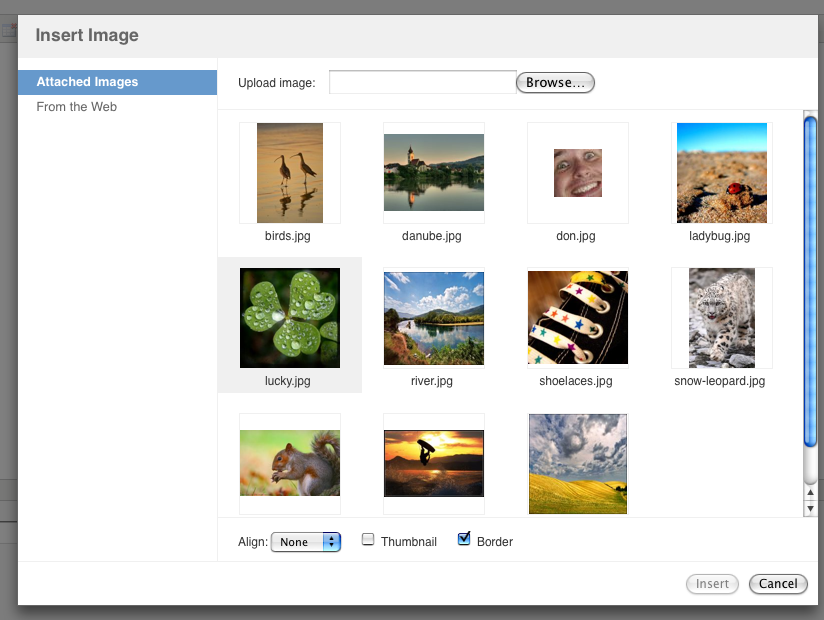 The image dialog is feature-complete for this release, but also has a few issues which will be fixed before the final release. Better handling of server outages and not being able to attach due to permissions is coming in the next release.

We have reverted to the two row layout to avoid permission-restriction-inconsistencies, and fixed a few bugs along the way. Most notably, inherited restrictions are now displayed separately from the current level's restrictions, and hidden by default. This avoids cluttering the page with stuff you usually know about already (when working in restricted page hierarchies). 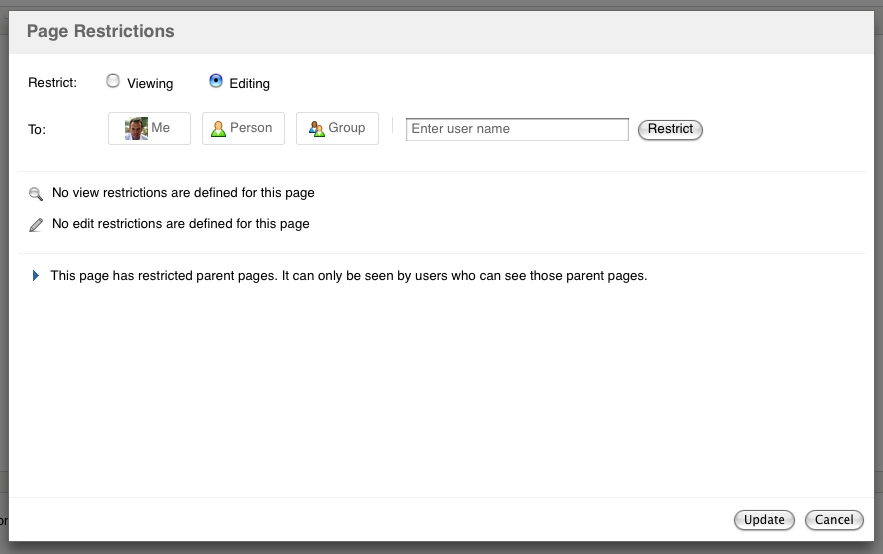 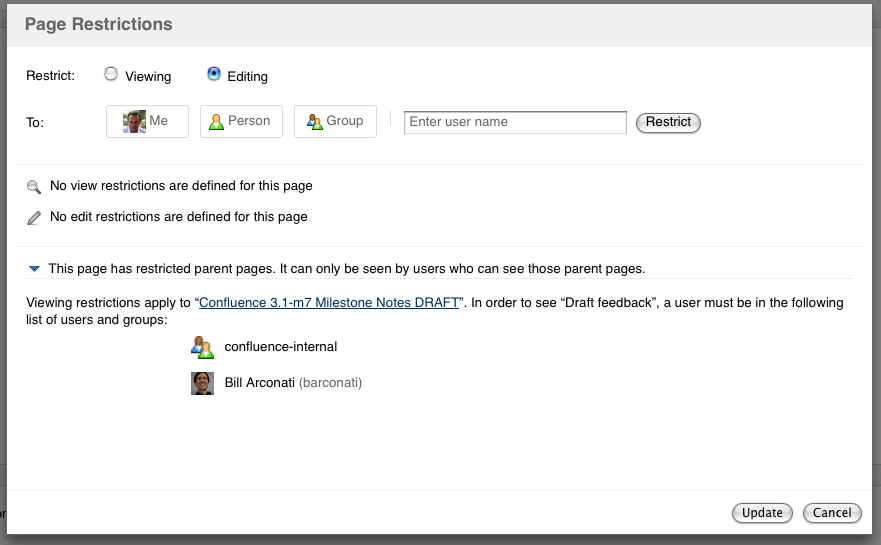 Nothing big went into M7, the super-batching work is ongoing and will mean faster page loads from 3.0-beta1 onwards.

The footer is now always at the bottom at the viewport, rather than the bottom of the content. This makes the layout a lot cleaner on short pages: 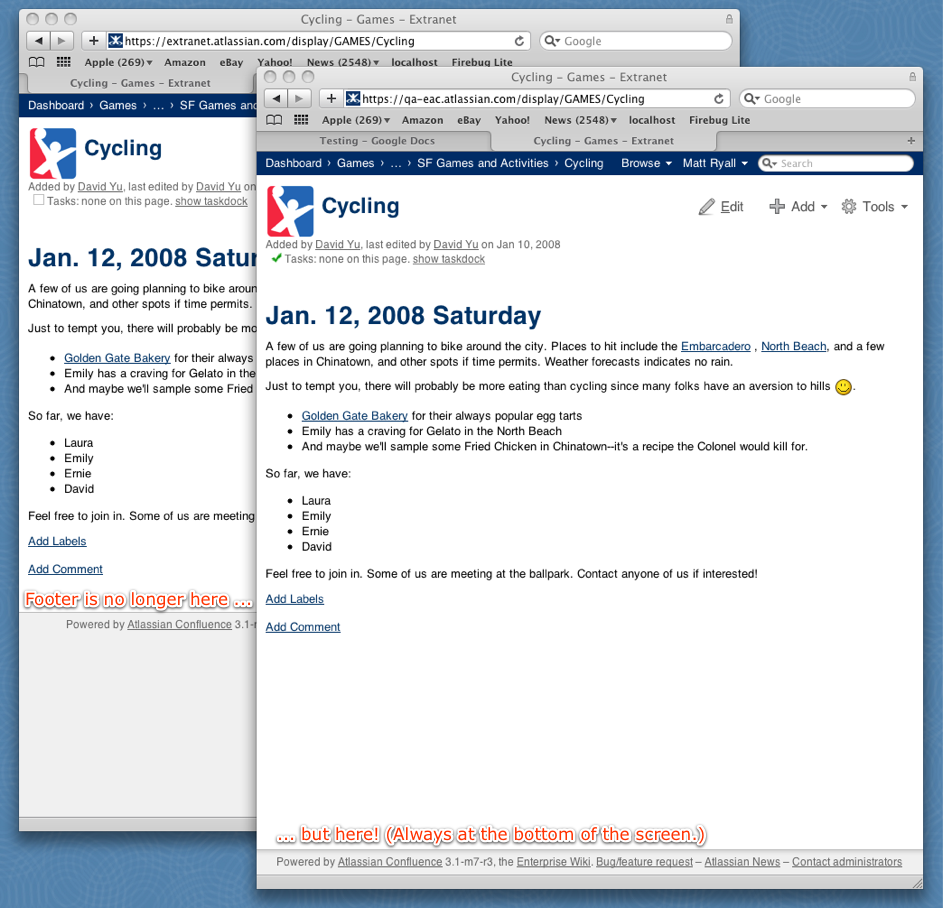 Beta 1 is due next week